Suited to drinkers of all ages this discreet bar is a great place to meet after work, before dinner or for a spirited nightcap (particularly as it stays open to non-residents ’til 1am.) 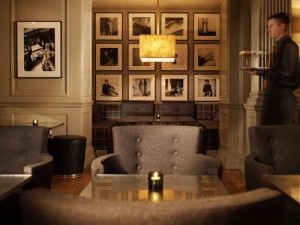 Donovan’s Bar is like your favourite pair of expensive but extremely comfy shoes: unmistakably smart to look at but reassuringly relaxing to hang out in. No wonder it appeals to such an eclectic crowd. On the evening we visited this Mayfair favourite was packed with an equal male/female ratio – some young, some old, quite a few were suited and booted while others were playing it cool in jeans and tees. It’s a one-size-fits-all place, which hopefully doesn’t sound dismissive or rude. What we mean is it’s intimate not intimidating, stylish but not stark, working perfectly well whether you decide to pitch up for cheeky afternoon cocktails or you’re looking for somewhere to round up your night.

The bar takes its name from the late, great master photographer Terence Donovan whose iconic black-and-white prints take pride of place on the walls. Apart from whacking up the impact button a full 100 percent, the 50 prints make a nice conversation piece if you want to appear in the know. While we’re on that particular subject, worth noting is the stunning stained glass window standing proudly behind the modern Bill Amberg leather bar – it belongs to the original St. George’s Hotel which dates back to 1889. Pull up a stool and watch the bartenders at work, or do like most of the crowd here and get cosy in one of the many cub chairs and banquettes – perfect for business meetings, girly get-togethers and romantic trysts.

There are many things you’ll never know about Ms S and her dealings with the late Terence Donovan are among them. All she’ll divulge is that they knew each other back in the day when he was at the very top of his game and she was young and very impressionable. So for her, there was no other option than the Box Brownie (strawberries infused overnight with Cointreau and lychee liqueur, finished with bubbles) in honour of the great man’s work.

Looks-wise, it had the appearance of one of his glam models rather than the man himself: slim as opposed to his larger-than-life stature; elegant and feminine compared to his macho East End persona. That said, there was something about the effervescent nature of the drink that really captured Donovan’s exuberant nature – even the strawberries echoed the spirit of this very big, bubbly, very English gent. The drink, served in an elegant champagne glass, was deliciously cold, perfect for calming frazzled nerves at the end of a busy day. The lychee liqueur added character and depth to the pink-tinged drink while the strawberry garnish topped the whole package off nicely. Lovely jubbly, as Mr D might have said if he’d had the pleasure to taste it.

After a bit of a question and answer session with Mr G the gin recommendation was Tanqueray No. Ten to “go with the twist” as it was the “best on the market”. This was mixed with just a “splash” of Martini Dry, more of which later. The drink was delivered in a classic, nicely frosted Martini glass with a perfect rectangle of lemon nestling at the bottom. The splash turned out to be quite significant; leaving the drink with a very strong taste, reminiscent of a Naked Martini. There was no doubting who was boss of this glass as the gin sat at the centre of things. The taste was nicely rounded, slightly peppery on the tongue, with a very long and satisfying finish.

Mr G is rather partial to a Negroni so was drawn like a proverbial magnet o the Tsar Negrosky (Rosemary infused Ketel One vodka, Campari, Red Martini vermouth). Served straight or on the rocks, Mr G went for the former option. It looked good and the aroma was equally satisfying, thanks in part to the huge strip of orange absolutely bursting with flavour. The rosemary wasn’t particularly evident, but the drink was none the worse for that. Mr G was very happy to be enjoying the somewhat unfairly overlooked Campari again. Herbs with a kick – a very tasty and robust aperitif.

You don’t see Pineapple & Ginger-Tinis (Ketel One vodka, crushed fresh ginger, pineapple juice and a touch of Aperol liqueur) on many menus, which is why Ms S decided to test drive this particular concoction for her TCL Choice. Smart move. There was no holding back on the ginger action: the fresh, very bold taste informed her of its presence even before she took a sip. Ms S was knocked out by its strong, peppery flavour but noted that lesser mortals might find it too overpowering for their palates. Fortunately, the exotic pineapple tang added a familiar, very welcoming taste which would more than win them round.

The striking black-and-white photographs adorning the walls. We love the ones hiding away in the “naughty corner”, featuring some of Donovan’s risqué work… Check out the historic jewel-like St. George stained glass window providing a stunning backdrop to the modern leather bar designed by Bill Amberg.

Not cheap but what do you expect, you’re in one of the finest hotels in London. Even so, £10-£14 is less than the price of most cocktails around these parts.

Good spot to remember when you need a well-earned cocktail after making a fabulous Bond Street purchase. Good spot for dates but equally suited to meeting up with your girlfriends after work.

Maybe it’s the lack of natural lighting, maybe it’s the iconic photos hanging on the walls, but there’s something about having a cocktail here that always makes me feel at the same time smart but just a little bit geezerish – in a good way.