On why bartending is a bit like acting, dealing with disgruntled post office customers in Liverpool bars and his invention; the DBS… 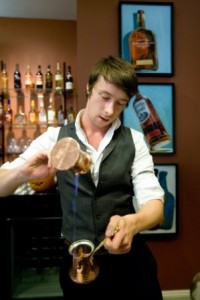 Well, I like to think I am constantly learning it, wherever I go. I was introduced to the bar world at a rather notorious establishment in  Liverpool, called the Velvet Lounge. It was hardly the most prestigious place in town, but it did have a fantastic speakeasy style bar downstairs, called ‘Bottomdrawer’. This was a haven of tranquillity beneath a den of iniquity, and looking back at some of products we had, and the cocktails we created, it was way ahead of its time in the city. The site is now a shoe shop, which is probably for the best.

Name a few of the places you’ve worked?

There have been a few! After the Velvet I had spells with a few small bars in the city, but my ‘big break’ as it were came when I went to work for Living Ventures, in the Living Room in Liverpool. At that time, it was the best bar in the city, and I was fortunate enough to work with some wonderful people, in a very talented bar team. It was here I honed my skills and discovered my passion for training people, and I progressed to become a trainer for the company. After a short career ‘sabbatical’ in Ibiza I returned to my home town to work as bar manager at Alma de Cuba, a fantastic venue and arguably the best in the city. They were fantastic times, and it was with a heavy heart (and a few empty glasses) that I left for London, and the Met Bar!

Who’s the most inspiring person you’ve ever worked with and why?

I don’t think I could name just one. I think in any profession there are always people in loftier positions, who you admire and aspire to be, but there are also those who you work alongside, or beneath you on the ladder, who also have the ability to inspire. I returned to Liverpool recently, and I was inspired by the amount of guys who used to work for me (as bartenders) at Alma who are now managing venues. And they are all so entrepreneurial! There’s definitely a bit of Branson in a few of those boys!

What makes a good barman?

The ability to realise you are as an actor on a stage, and it is important to play your role well. Know what’s expected of you, learn your lines, and put on a good show every night. That, and a strong liver.

Which barmen do you admire and why?

I admire everyone that realises their job is a profession, not just something to fall into during university, before you move on to a ‘proper job’. That, and the ones with strong livers.

What’s your proudest moment as a barmen?

Probably the first drink I ever made; a pint of shandy (half lemonade, half lager, in that order); I asked the customer if he wanted ice with it, then made it wrong, twice! In spite of this (or maybe because of it) the guy who ordered it went on to become a regular in the bar, and a good friend! I also won a national Jack Daniels competition in 2007, which was a fairly proud moment, too!

Blended!…I like a drink that is stirred, but still leaves me shaken.

What is your favourite drink

To mix
I’ve been trying to make a good Mai Tai for years, and I think I’ve finally cracked it, so maybe that one.

To drink
It depends on the time of day! As an aperitif, it must be a Negroni; on a warm day, a Margarita; for after dinner, an Old Fashioned or a Godfather (whiskey & amaretto).

On your menu
The DBS. It’s a twist on a Negroni and a Martinez (the drink that preceded the Martini), and it’s my own. Orange bitters, Beefeater 24 Gin, Aperol, Carpano Antica vermouth, and citrus syrup, with an orange twist. I made one for a good friend the other day, and he told me he loved me…It was an emotional moment!

Mixology is but one discipline of bartending, albeit one of the most enjoyable, and refers to the ability to create new cocktails, as well as old. I’m not particularly fond of the amount of terms people label us with. Stuff like ‘flairtender’? I mean, really. What next, ‘drinksmith’? Besides, Ned Flanders has a degree in mixology.

What’s your favourite all-time ingredient and why?

Good ice! You can’t make a good drink without it!

Wherever the free drinks are! After that comment, I’m afraid I couldn’t possibly name any venues…I used to drink in the places where I worked, simply because I like to drink with friends and all my friends worked there. At the Met we can’t do this, which is actually a good thing.

What is your essential piece of bar kit?

A good attitude. Sorry, another corny answer, but true! For the home bartender (‘hometender’?), it has to be measuring equipment, of any description, from 1ml to 25ml. Balance is the key to a good drink.

What has been your most unusual request at the bar?

I was once asked for a packet of stamps by a particularly tipsy gentleman, who got slightly aggravated when I told him we didn’t have any and did he mean cigarettes (‘fags’ in Liverpudlian). Eventually I calmed and sent him on his way. My manager told me the way I handled it was first class.

What’s your failsafe cocktail to mix at home?

If you could mix a cocktail for anyone, alive or dead, who would it be and why?

Winston Churchill. The man had an insatiable appetite for liquor of all types, and he liked his martinis as I like mine; naked (no vermouth). Also, seeing some of the quotations and put-downs attributed to him, I think he would be a hoot!

What’s your definitive cocktail recipe for us to add to our collection?

It has to be another twist on the Negroni. My reasons for liking it are threefold; it makes for a sweeter, more approachable version of the classic, it is easy to make, and it indroduces people to the wonder that is Punt e Mes and the joy that is Aperol.