The Old Fashioned. We love it. Deceptively simple, seriously satisfying. Throw in three brand new Woodford Reserve variations on this classic cocktail from some of London’s best bartenders, pair alongside Woodford inspired dining and you’re looking at one very happy evening. Welcome to The Old Fashioned Supper Club.

Actually the combination of Woodford Reserve in both food and drinks makes perfect sense. After all, Disappearing Dining Club has been including craft bourbon in its culinary creations for years. They’ve brought the two together in the Old Fashioned Supper Club, a brand-new pop-up celebrating the classic American cocktail and authentic taste of Americana. More than that, as we discovered, it’s a very tasty idea too.

To be honest if we had been served any of the three Re-Fashioned Old Fashioneds we would have been more than happy. Pairing them perfectly with Woodford Reserve dishes though, took the whole experience on to another level. Not surprising given the quality of the bartenders who have collaborated on the project – give it up for Dorian Meillan from Discount Suit Company, Rich Woods from Duck & Waffle and Joshua Reynolds from Hawksmoor Spitalfields.

Each bartender previewed a starter, main course or dessert, then set out to create a new take on the Old Fashioned which realised both the unique properties of the Woodford Reserve itself and the accompanying dish. And that’s the key. The drinks are amazing. So is the food. Put them together and the sum of the parts goes into sumptuous overdrive.

First up for our dining pleasure was Woodford Reserve orange and beetroot cured salmon with citrus and fennel salad. Alongside this came Dorian Meillan’s Re-Fashioned Old Fashioned (Woodford Reserve, St. Germain, Acacia honey and sea salt). The combination of honey and salt might appear a little unusual but, believe us, it cleverly complimented the salmon to beautiful effect.

The main course was a real crowd pleaser, Woodford Reserve glazed beef short ribs, smoked sweetcorn, black bean and avocado salsa with crispy tortilla. This needed a big drink to square up to it and Rich Woods’ Re-Fashioned Old Fashioned (Woodford Reserve, toasted hay and salted caramel popcorn) did just that, echoing the richness of the flavours but also teasing out the very best of Woodford Reserve’s subtleties. And, yes, we could taste the toasted hay.

After the ribs we could have happily have called it a day but then it would have been rude to refuse dessert. So up came the Chocolate brownie with Woodford Reserve and popcorn parfait. Helping it along was Josh Reynolds’ Re-Fashioned Old Fashioned (Woodford Reserve, maple syrup and Fernet Branca). Another well rounded drink, this time with a really rich sweetness, but with the Fernet Branca nodding to a suggestion of a digestif – as it we needed one.

The whole evening is a highly enjoyable new way of looking at food pairing. It’s like you’re experiencing an Old Fashioned for the very first time. Moreover, it makes the thought of wine pairing seem pretty mundane by comparison.

Treats like this don’t come along too frequently. In the case of The Old Fashioned Supper Club, just two nights in fact. So look sharp. 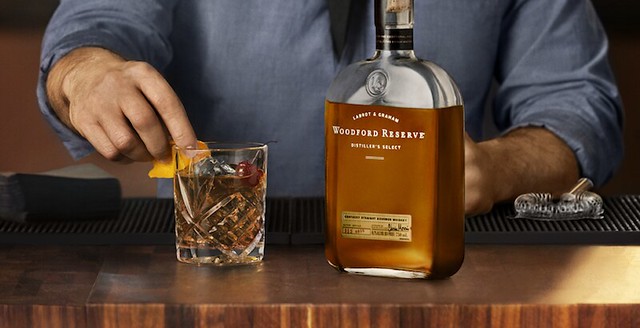