Here’s a question for jetsetting cocktail lovers: given the choice between flying with an airline that serves you a G&T with a lonely ice cube and a sad slither of lemon, or one that takes its drinks offering so seriously that it partners up with some of the best bars in the world (official), which would you go with? It’s a no-brainer, right? It’s the latter all the way.

Not for nothing is Virgin Atlantic known as the cocktail airline. Just as those extra touches like onboard WiFi, complimentary drinks and cutesy packs of Love Hearts are integral to the company’s offering in the air, so is the attention to detail in its nine Clubhouses. Leave aside the delicious pampering treatments, funky design and mouthwatering choice of food, (although they’re always very welcome when we fly, natch), we’re here to talk about the drinks. 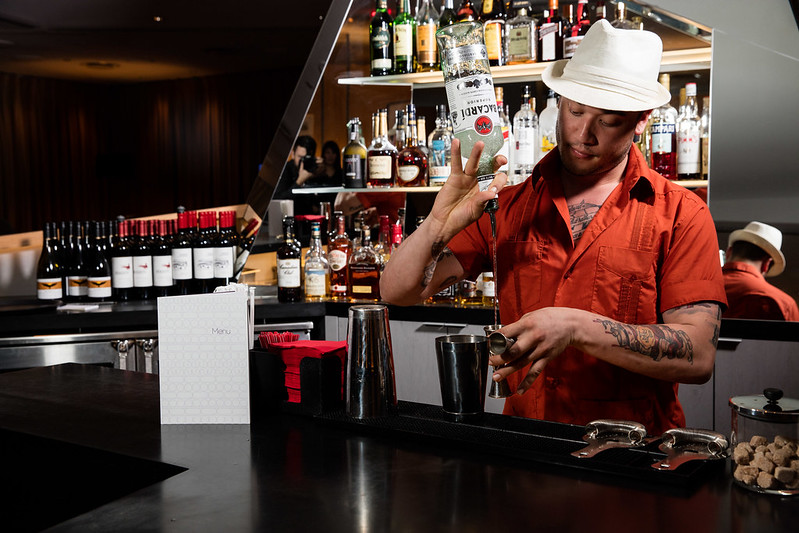 Jesse behind the bar at Newark Liberty Clubhouse

Or more specifically, its latest initiative where each Clubhouse is aligned with one of the coolest bars in its corresponding city. Travelling from San Francisco? Relax in the Clubhouse with cocktails from Smuggler’s Cove – one even comes served in a tiki mug. In London? Try a botanically charged drink from White Lyan at Gatwick, or its sister venue Dandelyan at Heathrow. Upper Class and Flying Gold members travelling from Los Angeles can choose from a selection cocktails from The Walker Inn in The Normandie Club, while those flying from JFK can take their pick from signature drinks from Employees Only. And while all five of those partner bars are all proudly placed on the World’s 50 Best Bars List, local, up and coming talent hasn’t been overlooked. For instance, the Clubhouse in Boston has drinks from Ruka on its list and Virgin Atlantic passengers in Washington are invited to treat their tastebuds to cocktails from the Colombia Room.

That’s how things were looking last year when the programme launched. The latest in the stellar line-up is Sean Muldoon and Jack McGarry’s BlackTail at Pier A which landed at Newark Liberty Airport in January 2017. The collaboration makes us happy on many levels. Firstly and most importantly, we’re huge fans of both brands. The coolest airline teaming up with the World’s Best Bar team and some of our favourite people in the bar biz to boot – what’s not to love?

Then there’s the fact that the bar is inspired by Cuba in the Prohibition-era. You know, that period when rich, glamorous Americans would travel to Havana for sun, fun and much appreciated Cuban rum. As Sean Muldoon says: “Given that BlackTail borrows its name from the historic seaplanes that lofted ‘dry’ New Yorkers to ‘wet’ Cuba, joining forces with a pioneering airline like Virgin Atlantic was a natural fit.” We couldn’t agree more. 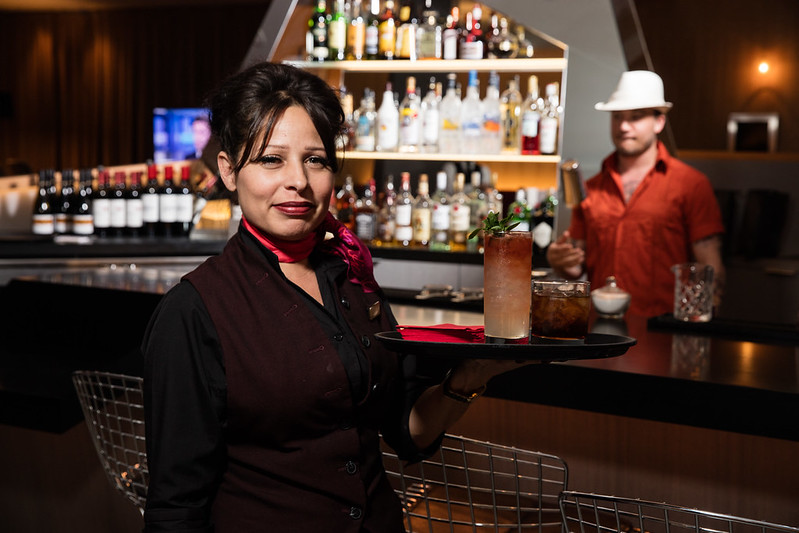 We flew out for the launch last week, tasting all six drinks on the Newark Clubhouse menu, first mixed with ease, grace and breakneck speed by Head Bartender/Bar Manager and menu creator Jesse Vida at BlackTail, then recreated by the team in the Clubhouse bar at Newark. We’ll come straight: while the Virgin crew are never going to match Jesse for flair and overall bartending finesse, we honestly couldn’t taste the joins.

That’s not dissing Jesse for a second. On the contrary, we’re championing him for his first-class training skills. We spoke to him about the collaboration, devising the menu and creating cocktails that fly

So Jesse, tell us, when did the BlackTail/Virgin Atlantic partnership come about?

We first had the discussion with Mark Murphy [Manager of Global Clubhouse Food & Beverage] in September last year. He was sitting in BlackTail and loved it – particularly the aviation connection we have and thought it would be a good fit.

Not being funny but airport bars aren’t renowned for their cocktail making skills. How did you approach the menu?

Ha! I think you almost come to expect bad service in an airline bar! Virgin Atlantic is different though, the confidence factor for me came from the bars they’ve already partnered up with: Dandelyan, The Normandie Club, Employees Only and Smuggler’s Cove – very reputable programs, great brands. Both The Dead Rabbit and BlackTail are considered to be high concept bars but really what we do is hospitality. I thought if I could relay that to the Virgin Clubhouse staff, I wouldn’t have to worry about devaluing our brand. I was right. 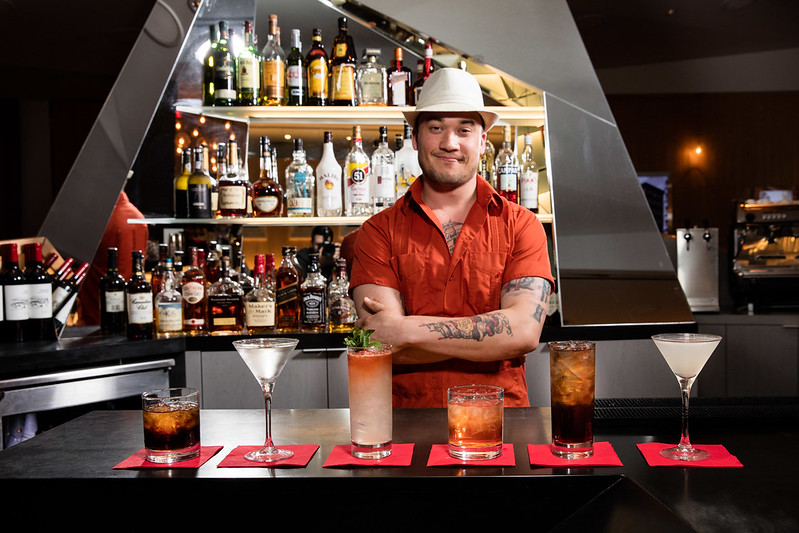 How did you approach the menu?

I wanted the cocktails to be a good overall reflection of the BlackTail program, with a cocktail that represents just about every style of drink we have on the menu. Our menu is broken down into six categories: Highball, Punch, Sour, Old Fashioned and Cocktail – so we hit on all of those categories for Newark. On the menu we have the BlackTail Daiquiri (Bacardi rum, fresh lime juice, cane syrup); Arawak (Bacardi 8 rum, Jamaican rum, Martini Rosso, Campari, vanilla liqueur, absinthe), Rum & Cola (Bacardi rum, Coca Cola, cane syrup, Champagne), and Alaska (Aviation gin, Martini Bianco, Yellow Chartreuse, cucumber bitters).

Bearing in mind you have over 10 years experience as a bartender, working in top venues like Booker & Dax, Dutch Kills and The Dead Rabbit, and you were creating drinks to be replicated by the Clubhouse team, how much, if at all, did you have simplify the serves?

The drinks are a little bit simplified and easier to execute but we treated this project the same as we do R&D for our menus at The Dead Rabbit and BlackTail. First I got to place to where I was comfortable, then myself, Jack McGarry (Managing Partner) and Jillian Vose (Beverage Director) tasted the cocktails together and gave our opinions.

As for the techniques, we have over 40 tinctures and infusions over at BlackTail – the reality is the Clubhouse is never going to be able to replicate that. One thing I did take over from BlackTail and leave them in control of though is the 2:1 cane syrup we use for all our drinks. You use less but it gives more to the cocktail – not just sweetness but viscosity and a really rich mouthfeel. 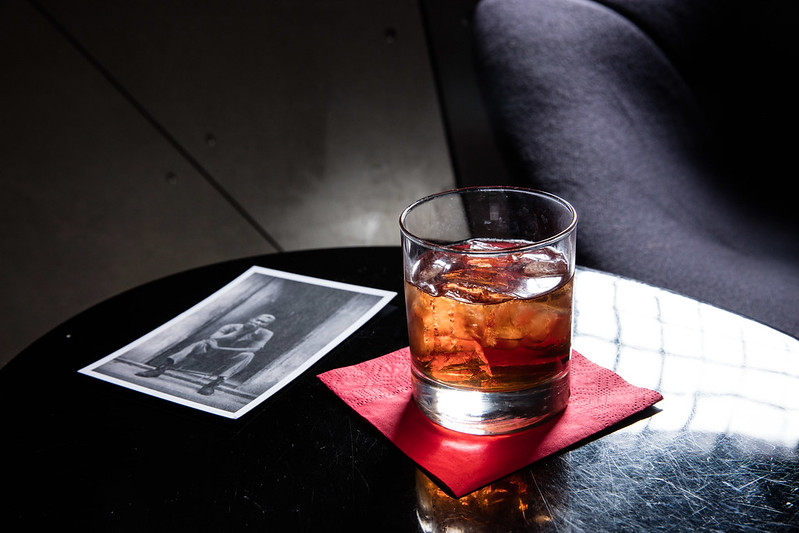 How long did you have for training?

We only had three days compared to the rigorous training we have at BlackTail but I think we made the best of it. The team were really excited and keen to learn.

Given that you know your customers at BlackTail, was it harder to create a menu for Clubhouse guests?

The clientele at Newark may not be the same people that would come to our bar, but that’s also one of the reasons that this collaboration is so great. If someone goes there and loves the drinks and overall experience, the chances are they may want to come to the source of it.

You can try the complimentary cocktails on the BlackTail menu at Newark Liberty Clubhouse.