Head here if… you’re after a romantic riverside retreat

With its Michelin star in the restaurant, the bar at The Bingham appeals to modern minded grown ups out to impress 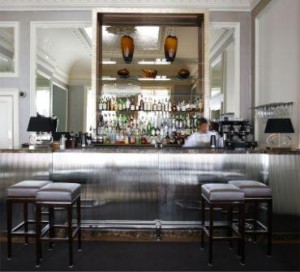 Grown up glamour at The Bingham

Glamour is a funny old thing. Particularly when it comes to bars. There are those like The Connaught and Artesian that ooze in-your-face slick service and sophistication, while others such as Milk & Honey and The East Rooms wear their badge of pride with a casual yet undeniably elegant style. So where does The Bingham fit in? It’s hard to tell. On one hand it looks like it’s going down the Connaught/Artesian route with its uber high ceilings, original cornices, elegant French windows overlooking the river and that’s before you even get into the details. We’re talking metallic leather sofas and armchairs, gold leaf ceiling, ornamental chandeliers, freshly-cut orchids on the mantelpiece and white roses on chic, low-level glass tables. But looks aren’t everything. A really good bar is as much about atmosphere as it is appearance and quality of drinks. So while nobody could deny that glamour is very much in evidence here, the mood and overall feel is more hotel lobby than out-and-out destination bar. For us a big clue is when the seats at the bar serve as props rather than a vantage point to witness the barmen at work.

That said, this is an excellent spot if you’re looking for somewhere safe and grown up to enjoy a quality drink. In fact, it’s easy to see why 30-something women gravitate to this place. It’s chic and extremely relaxing. The Bingham is also a magnet for couples – young or old.

To our little minds, the job of the signature is to provide a liquid shorthand to the drinks on offer on the menu of each particular bar. In the name of duty, Ms S ordered The Bingham (Absolut vodka, elderflower syrup and soda water). It might not sound overly exciting on paper but don’t be fooled by the simplicity of the ingredients – this was a classic case where less was definitely more. While she’s more of a Martini girl, Ms S was impressed by the fact that they had chosen a long drink to reflect the Bingham’s personality. With the lovely views over Richmond, it shouldn’t have been anything else. Sweet and sour combined in harmonious fashion in this deliciously refreshing drink which cleansed the palate, getting the tastebuds ready for more.

As Gin Martinis go Mr G felt that this one pretty much ticked all the boxes. It arrived at our table in a tall, classic glass with a very long, very thin twirl of lemon nestling at the bottom. It was pretty cold, too. The fragrance was very much of the Bombay Sapphire Gin itself, rather than of any discernible lemon aroma (due to the peel being dropped straight into the drink rather than squeezed over it or run around the rim). Similarly the first taste reflected this, being very much a cold glass of gin with the merest hint of Noilly Prat Vermouth lurking demurely in the background. Further into the drink the lemon finally put in a cameo appearance. Maybe it was the time of night, around 8 o’clock, but this was very much a true aperitif, pre-dinner martini. Not particularly memorable but doing its job.

The Royal Mojito immediately caught Ms S’s eye. Just like the lipsmacking version with Budvar we’d discovered a few years ago, this one relies on the addition of alcoholic bubbles to give it a unique kick. Champagne adds that extra special something here, in fact you can feel the effects almost immediately and it wouldn’t take many to get you feeling fairly tipsy. Caution: do not drink in the sun – there’s no telling what might happen…

It was nostalgia that brought the Ginger Martini (Absolute Citron Vodka, Stone’s Ginger Wine, Cranberry Juice, Lime, Gomme Syrup) to the attention of Mr G. Intrigued to see how Stone’s Ginger Wine, that venerable drink of yesteryear, would sit in a martini there was never going to be any other selection. It looked worryingly a little Cosmopolitan-esque for Mr G due to the colour of the Cranberry Juice. But not to be put off he discovered that it turned out to be one of those drinks that does interesting things and makes you want to work out just exactly what those things are. Not a particularly obvious aroma but the Stone’s Ginger Wine was there all right. And given the longish list of ingredients this is an intriguing mixture. Quite citrusy, a great balance of sweet to dry, with the ginger coming through nicely at the end. A really original and welcome cocktail.

Most of the cocktails come in at a reasonable £7 to £8, while champagne based variations are £10.

This is a perfect bar for ladies – whether you’re on your own, with a pal, or with your long term partner or a promising date. That said, if you’re under 30, it might not be quite as appealing but those riverside views will make up for any initial disappointment.

For somewhere that isn’t really all that far out of town it feels like a bit of a naughty escape kind of destination. Do yourself a favour and check into a room for the night with someone special.