Head here if… you’re in the mood to party and like fun with a capital ‘f’. 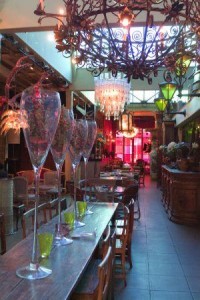 Loungelover: there’s not a wallflower in sight

Calling this bar theatrical doesn’t really do it justice – think of it as one big carnival in a room. Imagine Liberace given free reign with a prop box and you’ll get the idea – we’re talking 5ft high champagne glasses, sequined antler sculptures, over-sized glitter balls and more frills and frippery than Laurence Llewelyn Bowen could ever dream of. In the wrong hands such a heady brew would be, quite frankly, naff. But here under the careful art direction of the guys behind Les Trois Garcons, it brings out the performer in everyone. That means long term couples, those looking to impress a new date, city boys aiming to get lucky, newly single 40-something women enjoying their freedom and groups of hens and stags celebrating tying the knot.

On the Saturday night we rocked up it was full of all of these groups and more. In fact, it was so packed we couldn’t get anywhere near the bar. God knows how we managed to get our hands on a menu… Tricky to negotiate when you can’t even raise your elbow but nonetheless, we were determined to give it a go. Just as we were working out how to tackle the very extensive list  we were ushered to a table. Result. We’re not sure if this was because we looked like we were in need of one or maybe they had us marked out as serious drinkers. Either way we were fairly relieved…

You need time and a whole lotta space to consider the merit and the huge variety of cocktails on this menu. If we’re honest, there are probably too many to get your head round. That’s where the menu should come into its own, describing the drinks in as much detail as possible. Credit where credit is due though, they have tried… The drinks are broken down into a number of sections, some of which make perfect sense while others left us baffled. For instance, to us Old Flames suggested classic cocktails but these were found in the First Love section. True, both categories work equally well but on the whole, the descriptions are confusing for the customer.

We also thought the Loungelover team could provide a few more details about the drinks themselves as well pointing out whether the more esoteric varieties are served long, short or Martini-style. Call us old-fashioned but such details really do help.

As an experience you really shouldn’t pass this by but bear in mind the drinks err on the sweet side and are clearly aimed at the party crowd rather than out-and-out cocktail lovers. That said, you should definitely head here for the non-stop party vibe.

As far as Ms S was concerned The Loungelover set the tone for the rest of the menu with its sweet, almost cloying combo of fig liqueur, sweet vanilla, zesty lemon oil finished with Loungelover champagne. She loved the romance and old-fashioned glamour of the retro flute her champagne cocktail was served in but wasn’t so impressed with the drink itself. That’s not to say it was bad – it really wasn’t, in fact, it was pretty inventive – it was just a teensy bit too sweet. Although there was no denying that this was concocted with your average girly in mind, it didn’t quite cut it with this Cocktail Lover.

In such oh-so-over-the-top surroundings Mr G was fascinated as to how they would handle his beloved gin Martini.

So, what rocked up?

Well, to start with there was a delightfully traditional fancy drinks cocktail glass. This felt nicely in keeping with the vibe of the place. As to the contents: the vermouth was the almost ubiquitous Noilly Prat while the all important spirit was intriguingly Blackwood’s Superior Dry Gin. This Scottish variation is a particular favourite of Mr G and so things were already looking good.

There was a decorative twist of lemon but the emphasis seemed to be purely on appearance as there was barely an aroma. No problem. The drink was just cold enough and the fabulous Blackwood’s stood out nicely.

It packed a punch too. At 40% the gin was not unusually strong but it was well mixed enough not to be over diluted. And one was just right to kick things off.

Left to her own devices Ms S went for a Punk Passion, more for the name than the actual drink. Funny that such a tough-sounding drink should accompany a sweet, very soft cocktail with Snow Queen vodka, fresh redcurrant, passionfruit, lemon juice, sugar and Prosecco among the list of ingredients. Again, Ms S knew that it would strike the right note with the majority of girly-girls but not with anyone who wanted something just that little bit special.

The menu states that Mr G’s Noblesse Oblige is ‘served elusively as a Martini’. What does that mean? Who knows. Luckily the ingredients sounded appealingly refreshing (Bombay Sapphire, pink grapefruit liqueur and lemon juice). True, this drink was served in a Martini glass. Is that elusive or not? What was elusive was a sense of any real alcohol in the contents. Instead it tasted very fruity so it lived up to the promise of those ingredients. It was over in what felt like an instant while Mr G was still musing on that description.

It’s Oriental expressions all the way. If you fancy hot dishes, choose from the likes of Terriyaki chicken, gyoza and seared tuna. A variety of sushi options are also available.

It would be easier to say what not to look out for. As a visual experience this one would be hard to beat.

Drinks hover around the £7-£9 mark, rising to £11 for Martinis. Is the price tag worth it? That depends on whether you’re after a truly great drink or a really good time…

This is the perfect party place – highly recommended for birthday bashes or Hen nights. Great fun, very female friendly and good for getting chatted up, too.