Head here if… you want to impress 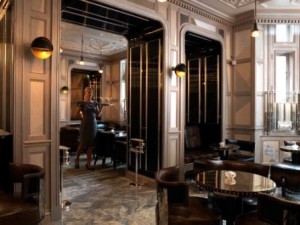 It could be your partner, a business associate, a friend or your parents, bringing them to swish setting of The Connaught instantly shows you know what’s what.

You don’t have to be rich to drink here but it certainly helps. £14 for a martini is pretty hard for the average person to swallow. But for cocktail connoisseurs or those out to celebrate a special occasion, an expertly made martini served in fine crystal and opulent surroundings is worth paying a little extra for.

And you certainly get the extra-factor at The Connaught. From the daily-changing liquid amuse bouche that appear at your table as soon as you sink into your seat, to the award-winning team shaking, throwing and pouring in such a careful, rhythmical fashion, this place is pretty damned special.

There’s no such thing as a bog standard signature here. Instead there’s a whole page dedicated to each barman’s specialities and another featuring seasonal ingredients and favourites. It makes for impressive if not slightly mindboggling reading. Just as well the barmen are more than happy to be your drinks therapists. When asked to make a recommendation, our barman asked Ms S a number of questions to gauge her taste and mood. Perfect. Especially when you’re faced with a long menu and a short attention span. Ms S loved the fact that she got to really think about the cocktail she wanted rather than making a hasty decision from a tempting but very expensive list. Armed with a few key details which included her favourite spirit and preference for sweet, sour or fruity tasting drinks, Ms S knew that in a few minutes she’d be making friends with something fabulous. Which is exactly what she got. The Silver Hound Cobbler (Hendricks gin, ginger wine, silver tea, fresh strawberries and homemade sugar syrup), had ‘lady’ written all over it, the pale pink concoction brought to mind a deliciously light, very sublime dessert. It’s a long, subtle drink designed to revive and refresh rather than blow your mind with in-your-face alcohol.

“That’s sublime.” So said Mr G after the first sip. But let’s go back a few minutes. Our mixologist was enthusiastic with two recommendations for the gin – 209 from Napa Valley or the Junipero from San Francisco, but when pushed he said the latter was his personal preference. This was stirred carefully in an elegant crystal mixing glass with Noilly Prat and several very, very large and dense cubes of ice. (These particular types of cube are exceptionally slow to melt, making for a drink that is good and cold without the danger of being over diluted.) This was then brought to the table, along with a simple, tall, clean-lined martini glass, where it was served in a theatrical yet highly relevant way.

The mixed Martini was not poured but thrown into the glass.  Throwing is not something sloppy, quite the opposite in fact.  It’s a particular technique (and indeed skill) which means pouring from a great height, in this case about two feet. Not only does this look impressive but it allows the drink to gather oxygen on its way to the glass, helping to bring out the flavour. A very generous, slightly irregularly cut slice of lemon peel is then squeezed over and around the glass, before being dropped in. The effect of this last flourish was that upon lifting the glass the lemon fragrance lingered around the drink, rather in the same way that elegant women know the best way to apply perfume is to gently spray it with an atomiser into the air and walk into it. So, to the taste… There was certainly a full-bodied power to it, rather close to a Naked Martini but without any of the harshness which can often accompany that particular martini variation. Indeed, there was also a soft, rounded quality to it. It had a texture rather like that of a liqueur, which allowed the depth of the Junipero’s botanicals to come through clearly in all their myriad beauty and then linger delightfully through a very long, gently diminishing finish.  Hence the utterance “That’s sublime”.  A perfect Martini.

Mr G would quite happily have ordered another Classic Gin Martini. However, being on duty he knew he had a responsibility to work the menu a little harder. Perhaps not surprisingly, his eye was drawn to the Connaught Martini. This could be made with either Tanqueray gin or Ketel One vodka, vermouth and a choice of bitters. Acknowledging how well the Classic Martini had gone down, it was cheerfully suggested that Mr G stick with Junipero gin. After discussing the merits of the various bitters it was agreed that lavender would sit well with that particular brand of spirit. Although not a fan of lavender per se Mr G felt confident in their hands to go along with the idea.His martini was prepared as before with the addition of the lavender bitters and served in the same way – the prepared concoction being thrown even more confidently from a height of about three feet. The overall impression of the drink and its taste were, happily, much exquisitely the same as the original. The difference lay subtly in the finish. It was as though the lavender had been shyly waiting in the background before demurely stepping forward. The effect of this was as surprising as it was welcome. An extraordinary Martini.

Ms S shocked herself by requesting a Bloody Mary, something she’d never usually do at night, if at all. But she had heard that this particular drink is the team’s take on molecular mixology and curiosity got the better of her. The ingredients are straightforward enough: Ketel One vodka, tomato juice, spices and freshly squeezed lemon juice but the molecular bit comes into play with the addition of celery ‘air’.

The preparation is fascinating, calling for a very different approach to the team’s many methods of crafting a cocktail. The rhythm for the Bloody Mary shake is slow, long and steady; the direction horizontal. It takes seconds and before you know it the BM mixture is poured into a coupe glass and then topped with the celery air. Having watched the entire process Ms S was smiling smugly to herself before the drink was even placed in front of her, she knew that she was in for something truly special. And she was right. This wasn’t a Bloody Mary as you know it and that was even without the addition of the cloud of foam on top. That thick, gloopy consistency normally associated with the Bloody Mary is out, in its place is a perfectly balanced, slightly spicy martini-like tomato drink. It was heavenly. And with the addition of the ingenious foam creation the Connaught guys have taken this often ordinary drink to a whole new level. A* for taste and presentation.

How does the idea of food devised by a 3 Michelin-starred chef grab you? Oh yes indeedy – The Connaught does bar food with oodles of style. Not only does Helene Darroze cook up a storm in the main restaurant, she and her team have created a delicious menu to balance the flavours of the cocktails in the bar.

The barmen, not necessarily as eye candy (although who are we to judge?), more in terms of their skills. Nothing as showboaty as Tom Cruise in Cocktail, their method of mixing is more about technique, balance and respect for the drink. You could spend hours watching them at work – make sure you get front row seats.

Okay, £14 for a cocktail (service not included) isn’t cheap. Think of it this way though – for the same amount you’d pay for two very mediocre drinks, you’ll have invested in one blinding cocktail you’ll remember forever (plus you get fancy warm spice nuts, caramelised pistachios and delicious olives marinated in parmesan thrown in).

This is the kind of bar that scores huge brownie points on the date-o-meter; it shows you’ve got class. Guys, book it if you want to impress that special lady, and if you’re a woman, book it (and pay) when you want to prove you know your stuff.

The whole look of the interior is off-the-scale amazing. The serving of drinks has been turned into an art form. And the Martini is amongst the very, very best I’ve ever had.