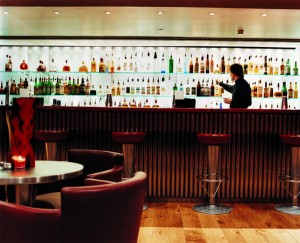 Dark, red, sexy, intimate and just that little bit on the night-clubby side, the Met Bar has an air of Eighties excess about it, perfect for refined schmoozing and boozing.

Once upon a time the Met Bar was the epitome of cocktail cool – everyone wanted to be seen there. But that was over ten years ago when Ben Reid ruled the roost. Stepping into the Met Bar more recently was like stepping back in time – the whole look not a million miles away from its heyday. Big changes were waiting for us on the cocktail front though. The person behind it all is Danny Murphy. More than being the man with the plan, he’s the man with the manifesto – and to prove it the menu is called ‘Our Met-ifesto’. This literally sets out a view on every spirit, such as ‘We like Gin…Gin is London and Gin is back. We love its new found versatility and its old world charm…’  There’s talk too of ‘The Met Apothecary’ including ‘Fig Infused Bourbon Whiskey’ and ‘Strawberry and Black Pepper Syrup’. The drinks themselves are divided into ‘Light & Aromatic’, ‘Medium & Spiced’, ‘Full Bodied & Spirited’ and ‘Bubbly & Beautiful’. Despite a few kooky names – ‘Lassi Come Home’ and ‘Swizzle My Nizzle’, along with some even kookier ingredients ‘Beefeater 24, cream of coconut, curry powder, lemon…’ make no mistake, these are serious drinks.

Every so often Ms S comes across a Signature that stands head and shoulders above the rest. The Smokey Sanchez (La Penca Caol Ila 18 year, orange bitters, agave, lime) is one of them. With its roots firmly in the Margarita family of cocktails, this stunning (surely award-winning) version balances Mezcal with agave syrup then goes and tops the whole thing off with a flourish of deliciously smokey Caol Ila malt spritzed around the glass. Ahh, the beauty of it. Each sip was met with a purr of contentment. The wonderful smell, first-class taste and agreeably warming sensation all work to create a cocktail bursting with “Latin spirit with Celtic swing”. As far as Ms S was concerned, this was an open and shut case of liquid genius.

The preparation of this particular Martini was like watching a masterclass in Zen focus. The recommended Beefeater 24 and the Noilly Prat were both produced from the freezer, along with the mixing glass. After adding said ingredients the glass was then filled to the brim with ice. With intense concentration the concoction was stirred before being returned to the freezer. Next came the fruit. A very long thin wedge of grapefruit peel was carefully cut and put to one side. The mixing glass was then retrieved from the freezer and its contents tasted. There then followed more mixing. And more tasting. And more mixing. A classic Martini glass was taken from the fridge and the liquid carefully poured in. The grapefruit peel was squeezed over the drink, before it was carefully draped over the edge of the glass – the wider, heavier end anchoring it to the bottom of the drink while the pointed tip languidly draped over the rim. The result of all this attention to detail was not mere theatre. The grapefruit aroma was beautiful. The temperature was absolutely perfect, beautifully highlighting the myriad botanicals of the Beefeater 24 and complimenting the grapefruit. One of the most flavoursome Martinis Mr G has experienced in a very long time, he could very happily of drank several. Delicious.

With his palate now well and truly woken up from an amazing Martini Mr G found himself eyeing up the DBS – aka the Aston Martini (Beefeater 24, Carpano Antica, Aperol, orange bitters, ’00 Citrus’ syrup). A brief conversation with Danny, in which he outlined that it was created as the cocktail James Bond would drink in the 21st Century, confirmed it. DBS stands for Dry But Sweet, and its smooth, easy-on-the-palate texture does indeed belie a herby, strong drink. Almost a sweeter version of that Mr G favourite, the Negroni, the secret weapon here (appropriate considering the Bond connection) is the home-made ’00 Citrus’ syrup. Consisting of lemon, lime and grapefruit, this syrup is citrussy and sweet at the same time, giving the drink a smooth texture as well as binding all the other flavours effortlessly together. Nice work Mr Murphy.

By this stage Ms S had well and truly fallen for Danny’s winning ways with cocktails, not to mention his infectious Scouse charm. So when he suggested she try an Antique Havana (Santa Teresa rhum, Havana Anejo, velvet Falernum, fresh lime, orange) to follow her Smokey Sanchez, she couldn’t possibly refuse. It’s his nod to the Tiki culture and it makes the transition from tropical climes to London drizzle with ease and elegance. The ingredients are blended to perfection with the muddled fruit sitting wistfully at the bottom of the glass. Chunks of pineapple, lime and orange echo the action as a flamboyant garnish. As for the taste: if the Caribbean were to be liquidised and poured in a glass, this is what Ms S imagined it would be like.

Quite an eclectic mix foodwise. Dishes such as crispy duck rolls with hoisin sauce (£13) make for a good cocktail accompaniment, while there are full-on meals including a chorizo hot dog with parilla chorizo, saffron mustard and chunky chips (£13.50) and chicken tikka masala with basmati rice and pineapple chutney (£17). There’s also the COMO Shambhala Cuisine menu (£13-£22) which offers dishes ‘prepared from raw ingredients, using methods promoting a healthful lifestyle’ – so there.

Everything on the drinks menu. (How can we resist going back to try Everest – the one with Beefeater 24 and curry powder amongst other things?) And the range of specially created syrups and infusions.

Price-wise, it’s pretty reasonable – okay, not cheap but with its reputation, Mayfair location and the fact that it’s a hotel bar, £12 for all the regular cocktails and £14.50 for the sparkling ones is not too outrageous.

This is a bar for grown ups, that goes for the drinks on the menu right through to the Eighties-style setting. Great spot for dates or meeting friends for drinks.

Despite the modern menu, with some particularly nice drinks, it still feels like you’re stepping back in time – not a bad thing if you’re in the mood for a bit of a hedonistic evening.