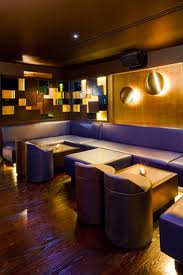 Juju, home of the Chelsea set

Is this is a bar that thinks it’s a club or a club that masquerades as a bar? Who can tell, it’s all rather blurry. From the look of the hostesses – all tight black lycra and swishy hair – it would appear that JuJu aspires to the club side of thing even though it makes a very big thing about its cocktails. In our opinion, it comfortably straddles both camps although unlike most common or garden bars, guests are warmly greeted at the door then ushered to a table where a waitress takes orders for drinks. We wanted to watch the barmen at work but as all four seats were already taken, we had to make do with one of the leather banquettes and low-level tables in the main space. Comfy they might be but we didn’t get that connection thing we like to get going between us and our cocktail maker/shaker. Not that any of the other guests seemed to mind, they were too busy checking their poses in the mirrors on the ceiling… Oh yes, with its dark chocolate walls, matching seating and tables there’s something of the 1970s porn star reincarnated about it – and think Austin Powers meets Andre 3000.

Of the Signatures on offer in the ‘JuJu Recommends’ section of the menu, Ms S opted for the JuJu Mojito (‘Passionfruit and champagne fusion to the mint and rum classic’). For Ms S’s tastebuds, the flavours worked extremely well. Veering to the strong side of the alcohol department, this is a drink that will definitely get the party started. It’s presented with a flourish of mint and passionfruit and packs a mighty fine champagne finish.

Our waitress/hostess was friendly but seemed a bit fazed by the idea that we might like some recommendations. Rather than leave it to the barman she preferred to reel off a list of the gins available. As to other suggestions; she said the martini could be shaken or stirred, also it could be served with a twist or an olive. Although Mr G valiantly pushed for recommendations from the barmen she was reluctant to depart without a definite order. So good old Tanqueray No Ten it was. What came back looked fair enough in a traditional, tall-stemmed glass, with a roughly cut, medium-sized strip of lemon peel. But there was no discernable aroma, neither gin nor lemon. Strange. And it really wasn’t cold enough. As for the taste; there just didn’t seem to be anything happening, and no finish of any kind. All a bit sad really.

It wasn’t the name, ‘The Fortune Cookie’, and it certainly wasn’t the description, “A potent aphrodisiac concoction…” that made Mr G choose this drink, it just appeared to be one of the less sweet things on the menu (ginseng, ginger, Chinese herbs, Sagatiba Cachaca, pineapple juice, lime and soda). It was served in the sort of glassware you’d expect to eat a sundae from, filled with crushed ice, with two black straws and a slice of lemon. But despite the welcome hint of ginger it was still very sweet, a bit on the watery side too and with a cloying aftertaste. Decisions, decisions. Would Ms S go for the Banoffee Caramellotini or Chilli Choc? Not a chance of either. Instead she opted for the Passionfruit Martini “An all time favourite!!!” (Akvinta vodka with a dash of pineapple juice, passionfruit puree, gomme and laced with Chambord). Blimey, was it ever sweet. Sweet but thin, with two distinct layers: one light, the other dark layer. Overall the taste was reminiscent of toffee with a pineapple topping. Which might be the ideal pudding for someone but not exactly Ms S’s idea of a blinding cocktail.

There was a neat little section of ‘Small Sharing Plates’ that were all Asian, including Giant Shrimp Crackers, Steamed King crab claws with ginger, aromatic duck roll with plum sauce. Quite tasty and a good, easy accompaniment to drinks. From £2.50-£8.50.

Very good selection of health-conscious drinks including Innocent cocktails, smoothies and low-fat cocktails packed with anti-oxidants, calcium, fruit, fibre and fructose instead of sugar. Other good ideas include the ‘Two’s Company’ cocktails for sharing, featuring ‘The Mojitwo’. Served in a very large bowl-type glass (like a goldfish bowl, the size of a football, on a stem – their description, not ours), served with very long (about two feet) straws. And, coming soon, the Tiramisu and Cappuccino martinis.

This bar is aimed at girly-girls, which is worth knowing if you’re a guy on the pull or a girl looking to get at least one drink bought for her by an admiring stranger. The sweet cocktails seem to be aimed at women too, as are the health-conscious drinks cleverly targeted at the skinny jeans brigade.

If you’re a guy and you want to have a cocktail here then order with caution. Go off menu, tell them exactly what you want and exactly how you want it. It’s not that the drinks are bad, they’re not, but they are sweet, very sweet.