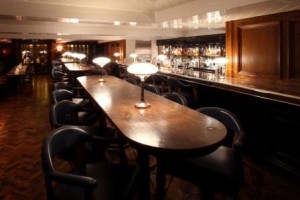 From kicking back in jeans and trainers to really going for it in a suit or a LBD, we can’t think of a more convivial spot to appreciate the crafting of a cocktail.

We won’t lie, we’d been looking forward to the opening of Hawksmoor Seven Dials for months. Having sampled Nick Strangeways exceptionally good concoctions at Hawksmoor Mark I in Spitalfields a while back, we had really high hopes for this one. As did the rest of London – foodies as well as cocktailians.

The first thing to get out of the way is the fact that Mr Strangeways no longer runs t’ings at Hawksmoor HQ, instead we have the wonderful Pete 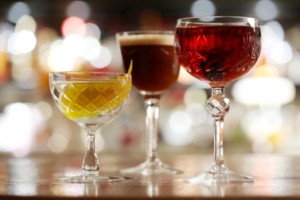 A selection of fabulous drinks at Hawksmoor

Jeary aka Shaky Pete is at the controls. We have to doff our caps to his excellent drinks list; even if you’re not a fully paid up member of the cocktail appreciation society, you can’t help but be impressed by the range of drinks here. Word has it that while the building (a former brewery in case you’re wondering) was being tarted up in the summer, Pete and his team were busily working their way through a wodge of out of print recipes, particularly those with a leaning towards the pre-Prohibition, golden era of American cocktails. We can’t thank them enough for their dedication. Of the many delights featured on the menu is Hannah Wooley’s Punch, the very first printed punch recipe from 1672, together with a wondrous selection of timeless faves like Fizzes, Aromatics and Juleps.

One of the additions that piqued our interest was the Bridging Drinks section. Here is the team’s rendition of the drinks quaffed by the idle rich of the Edwardian era: what else was there to do in between that post-lunch port and the essential pre-dinner martini? Under Jeary’s direction the drinks in this part of the list are light, playful and more often than not, charged with champagne. It’s not often we urge people to sit and read a bar menu but this one, cleverly labelled as The History of the Cocktail in 10 Drinks, takes you on an inspiring liquid history starting from the 17th century, journeying on to the Pina Colada and one of Hawksmoor’s own creations created to stand the test of time.

Pushing the drinks to the side for a moment (not something we do regularly but needs must), we have to say how much we love the decor here. There’s something about the vaulted brick ceiling, Victorian cast iron columns and chemistry lab tops serving as bar tables that makes you feel instantly at home. Add the dimmed lighting from the Viennese Hoffman lamps and a fabulous pewter bar into the equation and you have the perfect setting to enjoy some of the finest cocktails in London. Thank you to the powers that be for making Hawksmoor Seven Dials our new local, we promise we won’t let you down… 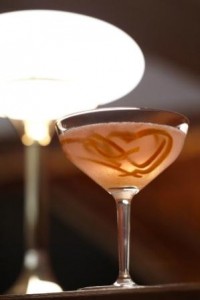 By law, Shaky Pete’s Ginger Brew (gin with homemade ginger syrup, lemon juice and London Pride) should have been the Signature drink sampled by Ms but as she’s not particularly partial to bitter, she gave it a miss. Instead she went straight to the Anti-Fogmatics section of the menu, zoning in on the Marmalade Cocktail (gin, Campari, homemade orange bitters and marmalade.) Sweet, sour, tangy, cleansing, sharp were just a few of the adjectives that came to mind but ultimately, this drink which is inspired by an original from Harry Craddock at The Savoy from the 1920s, could be summed up in one word: de-lish-ious. Pretty to look at, absolutely divine to taste. Highly recommended.

Well, this is a rare thing, so brilliantly seduced by the surroundings and the whole atmosphere was Mr G that he didn’t push the barman for his usual Martini. Instead he went with its noble ancestor from 1862, courtesy of the great Jerry Thomas,  in the shape of the Fancy Gin Cocktail (gin, curacao, homemade orange bitters, cane syrup). While obviously on the sweeter side it set the tone nicely for things to come, making a real feature of the gin. They refer to it as a “celebration of our national spirit ” but we’d go further saying it beautifully celebrates the spirit of London. Oh, and it tasted fabulous too 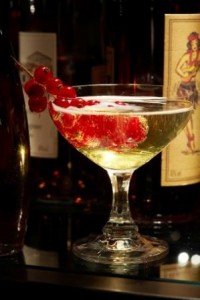 Faced with a list of this magnitude, making a choice is serious business. In fact, you need a drink just to consider what to have next. Ms S went for The Dandy from the Bridging Drinks section of the menu, a wonderfully effervescent combo made by stirring cognac, Maraschino, Benedictine, topping with champagne and garnished with a fat and festive sprig of redcurrants.  It looked fantastic but the taste was even better – another hands down hit. As for Mr G it had to be the Tobacco Old Fashioned (Rye, sugar, homemade tobacco bitters). A fan of the Old Fashioned this added a startlingly original twist with the hint of tobacco. If you like a cigar, or even the idea of a cigar, give it a go. Seeing as we were on such a roll, we decided to push the friendship and go for one more cocktail, this time something to share. The Bottle of Manhattan for 2 (rye, vermouth, Maraschino, cane syrup, Angostura Bitters and a dash of absinthe) had our names written all over it. The presentation won us over straight away – who could fail to be impressed by the arrangement of retro glasses, apothecary bottles, plump candied cherries and mis-matched glasses all brought together on a silver tray? The taste though was superb. Not only is this an ingenious way to serve a classic but they’ve added a clever twist that makes it work for modern palates. Hawksmoor, we salute you. 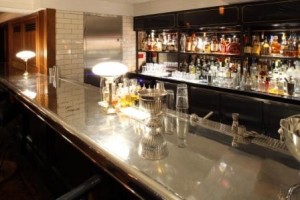 This is the type of bar food we’ve been craving for years: nothing fancy, just great ingredients and plenty of ’em. You can choose from the bar menu or order from the restaurant without moving from your bar stool: we’re huge fans of the starter portions of pork belly ribs (£9) and grilled lamb cutlets with mint and caper salad (£5.50), accompanied by a portion each of triple cooked and beef dripping chips (£4). Otherwise plump for a burger served with aforementioned chips or a calorie-friendly salad (£15) or a buttery lobster roll (£25).

Definitely the menu, followed by the bar itself. We also urge you to try something meaty from the food menu – as long as you’re not a veggie, you won’t be disappointed.

This is my new go-to bar to hang out with the girls, eat great food, chill with Mr G or even hide away on my own. One size pretty much suits all my requirements.

This has gone straight into my list of absolutely favourite London bars. Amazingly original and beautifully prepared cocktails, bar food that is just right and surroundings that wrap around you like a favourite overcoat. It’s just down the road from us too. Heaven.