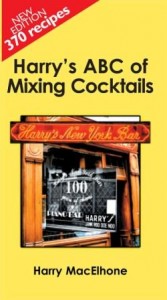 Newly revised and updated edition of Harry MacElhone’s cocktail bible to celebrate the centenary of the world-famous Harry’s New York Bar in Paris.

Featuring all the recipes you probably need to get the party started including the Bloody Mary invented at Harry’s Bar in 1921 and the White Lady, another Harry MacElhone orginal, devised at Ciro’s Club in London 1919 and remodelled at Harry’s Bar in 1929. The front section of the book includes a fascinating history of the bar, an intro by Harry himself, invaluable info on arranging and tending a bar, plus excellent tips to bartenders.
It’s not one of the sexiest looking books we’ve seen – in fact, there’s not one picture in the whole 98-pages but with its A-Z thumb index to make finding recipes easy-peasy, it’s an essential guide for professionals and enthusiasts alike.

98-page pocket-sized guide packed with great tips and 370 winning recipes for the bartender and the home entertainer.

This is a delightful book but it might be a little bit daunting for the complete novice. That’s not me being patronising, I’m simply stating a fact. The instructions are minimal to say the least. Ingredients are simply listed as one-sixth of this, one-third of that and a dash of whatever – nowhere in the handy, pocket-sized book does it explain what the measures are and what the ratios refer to. For the record: we work with a 25ml measure and a total cocktail being 3oz or 75ml, but we stand to be corrected. Other than that this little gem is packed with cocktail nuggets, including an array of recipes and no-nonsense tips.

I have a very soft spot for this book – an earlier version being the very first cocktail recipe book that ever came into my possession. And for many years it was my sole reference for all home cocktail mixing. It’s nice to see that this new edition doesn’t mess with a very winning formula. Pretty much every classic cocktail you could ever want is here. I love the OCD efficiency of the index and I also love, even more, ignoring it and dipping in to see what delights turns up. On a separate note any aspiring bartender should read this book for Harry’s simple and sincere guidance on bar etiquette. A great man.

To win a copy of Harry’s ABC of Mixing Cocktails, please sign up for our newsletter. The lucky winner will be announced on 8th February.