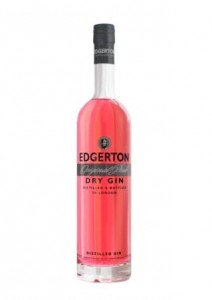 Another new product on the resurgent London gin scene. It looks like a bottle of ‘blush’ wine, it comes from Clapham, south London and it has a mighty big ABV…

“The blush of Edgerton Original Pink derives from the pomegranate… There are many gins on the market. Most are white, a few are blue, but now comes something rare and very fine: London’s first Pink Gin.”

Looks can be deceiving. This pink gin is a case in point. From its packaging and colour you’d be forgiven for thinking it’s a rose wine, all insipid and girly when in fact, with its 47% vol. it could knock a prize fighter out cold. The aroma is subtle enough but tasting it neat doesn’t really show it off to best effect. Contrary to the soft hue, there’s a harshness about it which shocks the palate as it’s expecting something softer, something sweeter, something more rounded. That said, it works very well in a gin and tonic – both aesthetically and in the taste department. Less so in the martini where the colour looks on the synthetic side and the taste bounces around the mouth not really finding harmony with the vermouth.

Neat, it’s nothing short of an explosion of alcohol in the mouth. There’s a little fruit there and a pleasing texture, then that alcohol hangs around and around. But it feels a little unrefined. In a G&T it looks great, with a pleasing blush of a colour, and cut with the tonic the flavour mellows off but still delivers a very powerful drink. In a dry martini it lacks depth and struggles to hold its own against the vermouth. So the way forward seems to be a big G&T.

The original Pink Gin is a combination of Plymouth gin and Angostura bitters, made fashionable in the United Kingdom in the mid 19th century.

Method:
Shake well and serve with a twist of lemon peel.

Available from Harrods and all good retailers, priced £31.50