Head Here If… You like trendy but not intimidating; grown up but not dowdy in an easy, elegant East End setting 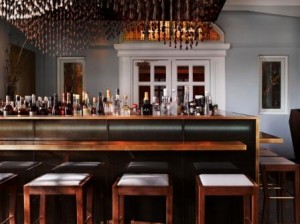 You’ve got to be brave, very confident or downright daft to open a boutique hotel, restaurant and bar in deepest, darkest Bethnal Green. But it’s worked. Not only has Viajante managed to draw a very discerning crowd, it’s even picked up a Michelin star…

It takes a bloody good bar to get us to schlep out to Bethnal Green. The fact we’ve done it twice is testament to Alex and Warren, the two fabulous barmen who work the bar like the  leads in a well-scripted show. Just as well really, this bar is a bit like a boxing ring – square but central to some knock-out action.

For drinks lovers like us there’s no better place than taking a ringside pew but for those who want to enjoy the drinks without the theatre, there are tables and chairs dotted to the rear of the room, or there’s just enough space to hover in between both. The crowd is very mixed, everything from grown up 20 year-olds to the young-at-heart 50-pluses. That said, everyone has a meeja vibe about them, making the place feel like a nice, relaxed exclusive club without airs or graces or a hefty membership.

There’s a new cocktail list in the offing so we’re privvy to a few new drinks with no names. Like the gorgeous pink cloud of loveliness that arrives in a chilled metal goblet, garnished with rose petals, purple cress and some exotic bloom that looks like a gardenia. It’s so beautiful, two extremely stylish guys from across the bar nod their approval as Alex presents it for Ms S’s delectation. Not that she needs anyone else to vouch for how good it looks, the presentation of the smooth, creamy blend of gin, port, lemon, bitters and egg white speaks for itself. There’s a touch of the milkshake about it, which is dangerous to say the least. It’s mixed with such precision it feels like nectar. Here’s hoping it makes its way on to the new list. 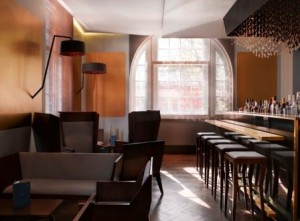 It’s a pretty smart thing to be able to come up with an original take on the classic martini while at the same time remaining true to the principles of it. And when that drink is also  inspired by London, then you have really got Mr G’s attention. The Fergusson Martini (Jensen’s Bermondsey gin, Old Tom gin, Bols Genever and Lillet Blanc stirred with lemon oils) is like the history of London gin in one very tasty martini. Cleverly using equal measures of Genever – the first gin to hit London; Old Tom – its slightly sweet descendant and a London dry gin – the one we recognise today, together with a little Lillet, we have what could be just a gimmick. Luckily it is much more than that. Served in a beautiful crystal wine goblet with possibly the biggest twist of lemon peel ever, it looks magnificent. It tastes that way too. Having been stirred in a glass coffee jug (yep, a coffee jug) it allows the drink to be really cold but not over diluted. An original drink and a delicious one. A real London martini.

Ms S decides to go old-school with a Breakfast Martini (Chase Marmalade vodka, Cointreau, fresh lemon, choice of orange or grapefruit juice and honey). Oh yes, this is exactly her kind of drink. Alex recommends grapefruit juice rather than the orange and boy, does it work a treat. The marmalade vodka makes it a much lighter, fresher, smoother drink than the gin-based ones we make at home, plus there’s an added  tang of grapefruit tempered by the sweetness of honey. It’s so good, Ms S makes a note to add Chase Marmalade vodka to her shopping list…

Going with another Alex recommendation Mr G takes receipt of the Buffalo Jam (Buffalo Trace bourbon, Lemon Fargo Jelly). It’s shaken and served in a jam jar, with a little mint and a black paper straw. It’s very strong, has lots of flavour, the bourbon coming through nicely with just a little sweetness. And apparently the lemon jelly is a South American natural aphrodisiac, hmmm…

We would usually call it quits at this stage but seeing as we’ve come this far, we allow Warren to twist our very rubbery arms and stay for another. He mixes us up a Ghengis Khan, another new libation coming to the Viajante list. We’re so glad we’re easily swayed, the cold fizzy punch with its combination of  Green Chartreuse VEP, fresh Sea buckthorn juice, fresh lemon and lime, peychaud bitters and garnished with gold edible flakes come together like a dream in a glass. We would have loved to have seen it on the menu in the run-up to Christmas as the autumnal colours and spicy notes bring to mind long, lost wintry nights.

With the bars food coming out of the same kitchen as Nuno Mendes’ Michelin-starred restaurant over the corridor, you know you’re going to get more than chicken in basket-style snacks. We went for sugar snaps with horseradish and soy (£2), prawn samosas with coriander yoghurt (£6) and mini bocadillo mixto (£3.50) but could have chosen from goodies like shrimp and leek pot stickers with marinated cucumber and ponzo (£7) or lobster and bacon club roll (£9) – absolutely delicious.

The theatre behind the bar. It’s a joy to watch a lab-coated Alex throwing, pouring and flaming like a good ‘un, his enthusiasm is infectious.

Don’t be put off by the postcode, Viajante has put Bethnal Green on the trendsters map. The dinky bar suits pretty much all occasions from drinks with the girls and date night, to pre-party gatherings or pure cocktail appreciation. Make a night of it and order food at the bar or try your luck for a table in the busy restaurant.

This really is a destination bar. If it’s not on your doorstep do yourself a favour and make the effort to get over there. Then celebrate by ordering the fabulous Ferguson Martini.