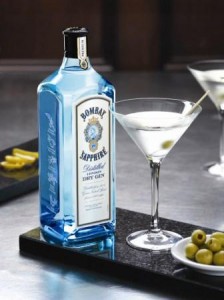 Modern gin drinkers are a fickle lot. One minute they can’t get enough of the cucumber botanicals, the next it’s all about grapefruit or specialist tea. Bombay Sapphire aka ‘the blue gin’ rarely gets a look in. That’s not to say it isn’t popular, quite the opposite in fact – your average drinker can’t get enough of the vapour infused spirit. It might be regarded by the cognescenti as the vodka drinkers tipple but love it or loathe it, Bombay has got a huge part of gin market licked…

When Bombay hit the market in the mid-1980s, vodka was the sexiest spirit around. So for any gin to be able to knock it off its perch and carve out a contemporary niche for itself was no mean feat. No mean feat at all. But thanks to a savvy breed of bartender, a refreshing blue bottle and a handsome marketing budget Bombay was one of the brands that propelled gin to a whole new market. Not bad going considering its based on a recipe which celebrates its 250th anniversary this year. And whatever your thoughts on it, you can’t deny it’s got more people drinking and more importantly, appreciating gin. Consequently it’s still a hit in the bars and supermarkets and dare we say it, it’s not too shabby in a martini or a G&T. Don’t take our word for it – you’ll find the bottle sitting pride of place on The Chef’s Table at The Savoy Grill where you can tuck into a special menu based around Bombay Sapphire’s ten botanicals. If that’s out of your price range (and let’s face it, The Chef’s Table at The Savoy Grill ain’t cheap), look out for the new multi-million pound Infused With Imagination campaign which launched at the Imagination Gallery last month. As well as unveiling designer Yehrin Tong’s visionary 3D installation featuring 75,000 crystals painstakingly put together to replicate the essence and character of Bombay, the evening showcased an array of stunning cocktails, including something very stunning with candyfloss, created by Brand Ambassador Sam Carter. Here are a few to try for yourself:

Method
Fill a mixing glass to the brim with ice. Splash over the vermouth, stir once, strain the excess liquid leaving the ice in the glass. Pour over the Bombay Sapphire, stir carefully but rapidly for 20-30 seconds until ice cold. Strain into the chilled martini glass. Garnish with a lemon zest.

Method
Muddle the peach in a mixing glass before adding all other ingredients and stir with ice. Fine strain into a tall glass filled with ice and top up with soda water and stir. Garnish with a wedge of peach.

Method
Fill a rocks glass with crushed ice, add the ingredients then pour the creme de mure slowly into the centre of the glass. Garnish with a fresh blackberry and wedge of lemon.