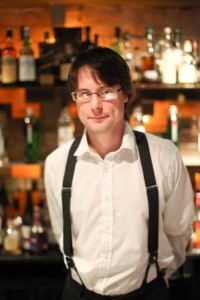 The lowdown on Julian

If you’ve been to any good London bar over the past few years, the chances are, you’ll have had your drink mixed by Julian de Feral. He’s done his bit at the Rockwell Bar at The Trafalger Hotel, Milk & Honey, and helped open the East Room, which sadly burnt down a while back. You’ll currently find him shaking and stirring at Lutyens in the City.

Julian has been competing consistently since “2007, I think it was”. He’s made it through to the World Class UK Finals twice before, and represented England/UK for the world finals in France (twice), Sweden and Brazil. Last year he was team captain for the bartenders (obviously) in Imbibe’s Bartenders vs. Sommeliers competition, which the bartenders won. He goes through to the World Class UK final this year with his drink, Ruby Can’t Fail…

Like most bartenders: chance, circumstance and a means to an end. Whilst studying for a degree in illustration I supplemented my funds by working in a variety of bars, pubs, clubs, hotels and restaurants. When my career as an illustrator didn’t quite take off I decided to concentrate more seriously on bartending, which I had been enjoying immensly. I started to get great feedback from my customers, upped my game by working for progressively better bars and educating myself in the field as best as I could.

Too much! I get emotional when I think about how lucky I am to be working in such a wonderful industry doing what I love so much. To name a few: daily human interaction, the bartender community, the creativity, the passion, the fun and being involved in what is quickly becoming recognised as another ‘golden age’ for bartending.

My fellow bartenders, they know who they are. For their persistency, thirst for knowledge, skill, good humour, generosity, hard work, passion, creativity, humbleness, attentiveness, awareness, showmanship and theatricality.

If you could mix a drink for anyone alive or dead who would it be and why?

I really don’t know. How about a big punch for everyone?

What’s your favourite classic cocktail and why?

Again, I’m afraid I’m going to be vague. I go through phases.

What’s the most unusual request you’ve had at the bar?

I’ve had all sorts, but a recent one was at a pop up bar/restaurant, when a young lady asked for a really strong, sour and creamy drink that didn’t taste of alcohol and didn’t involve any ice. Oh, and one of my all time favourites must be a guy who kept on ordering his vodka “straight up on the rocks”. He owned the vodka company. Somebody should have a word…

Every time I see a smile cross the lips of a customer after having their first sip of my libation. Say ‘cheeese!’

I’m going to quote Cheryl Cooke, the inventor of the Cosmopolitan, for this one: “Not so much trying to invent the wheel, just bringing it up to speed.” That is pretty much my philosophy, as well as trying to think outside the box.

Do you have any funny/embarrassing anecdotes in the rounds leading up to World Class UK finals?

No, afraid not. Nothing springs to mind. It was a very sombre affair.

Have you picked up any good tips from the competition? If so, what are they?

Yeah, Barrie Wilson pointed out that I somewhat neglected the whole brand knowledge/heritage part. I know this stuff but I suppose I get too wrapped up in trying to convey my ideas and the presentation side of things. Also I sometimes feel a bit funny doing the whole ‘brand bit’: repeating the facts and figures to people who know about the product much more than I do. The funny thing is, I do it all the time in my bar with customers who seem eager to learn about a product.

Another shiny buckle on my belt! An honour! I’m glad I’ve still got it, after all these years.

A whole ton of planning and stress. To represent the UK in such a large, prestigious competion is a big deal, and I would really want to go in with my guns blazing.

Who would you thank in your World Class acceptance speech and why?

There would be a speech? I’ve got to go practise infront of the bathroom mirror… My barbacks. My neglected others…

A punch. Just because. I’ve run out of time…

The drink that got him through 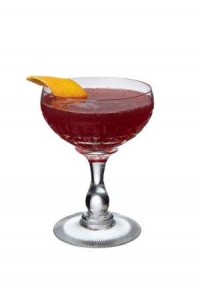 The inspiration for this drink comes from the growing popularity of simply constructed yet complex and well balanced cocktails involving wines.

Shake ingredients with ice and fine strain into a chilled coupette glass. Garnish with a grapefruit twist.

Keep up to date with the World Class UK Finals with The Cocktail Lovers on Twitter, Facebook, Bloglovin’ and of course by checking back every day for our latest posts.