Some contests focus on the same age old rules and regulations. Bombay Sapphire Gin’s World’s Most Imaginative Bartender is a little different. Combining the skills and precision necessary in a traditional cocktail competition with imagination, this is one comp where ingenuity is key. There are some guidelines: in keeping with the brand’s Imagination Distilled ethos, creating a reimagined twist on the Bombay Sapphire Ultimate Gin & Tonic to be served in the distinctive Bombay Sapphire balloon glass is one; concocting an imaginative signature serve using Bombay Sapphire Gin is another. And of course it helps if those taking part show off their understanding of the unique vapoured-infused gin and its 10 carefully chosen botanicals*

Otherwise anything goes – from creating a spherified salty fish spirit to replicate blue waves and echo the colour of the iconic Bombay Sapphire bottle, through to concocting a cordial made with ivy leaves. It’s not all about using wild and wacky flavours though. “Basic ingredients can be very imaginative,” says Sean Ware, Bombay Sapphire UK Brand Ambassador. “It just depends how you use them.”

IMAGINATION IN A GLASS 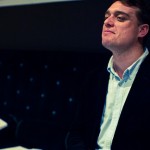 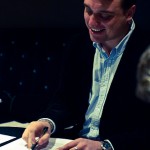 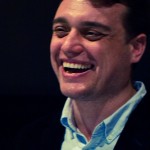 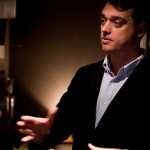 What makes an imaginative cocktail? The choice of ingredients? Presentation? The degree of technique involved? Rationale? “It can be one or a combination of all those things,” confirms Sean. “Sometimes it can even be down to creating an experience.”

We’re upstairs in Callooh Callay bar in Shoreditch, no slouch when it comes to serving up imaginative cocktails itself. Joe Wild of Berry & Rye bar in Liverpool, last year’s UK and Ireland winner is here too. The mission? To sift through the entries to find the most inspiring cocktails to go through to the semi-finals in the 2014 UK and Ireland leg of the competition.

Which might sound like it should be simple enough. But when you’re asking the most creative bartenders from Newcastle, Glasgow, Manchester, Edinburgh, Liverpool and London to unleash their imaginations, the selection process was never going to be easy.

A WAY WITH WORDS

Contrary to what you may think, at this stage of the competition there’s not a cocktail in sight. Instead Sean and Joe rely on their minds and adept knowledge of how flavours and texture combine to whittle down the entries.

It begins with words. Some hopeful bartenders just list ingredients, others express their ingenuity with a narrative. If you thought all cocktails were created equal, think again – here we’re taken on big, bold and courageous adventures in liquid form. Each entry is carefully considered for balance and creativity

We read of whimsical once upon a time-like stories from Matt Fairhurst of Callooh Callay. His words are so compelling, so inspired, he gets through without revealing his mystical recipe. “That’s imagination at work,” says Sean as he circles a big fat ‘yes’ on Matt’s entry. Then there’s Luca Corradini from the American Bar at The Savoy who bases his drinks on what the Queen would ask for if she popped into the bar, proffering up a  gin and tonic livened up with a homemade Buckingham Palace essence, “I’m intrigued to taste that,” adds Joe reading through Luca’s supporting statement. “If I was to enter this year I wouldn’t know how I’d stand up to some of the drinks here,” he continues. “It’s really interesting for me to see what other bartenders are doing out there and what their take is on imagination which is so crucial for this competition.” 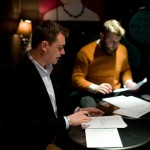 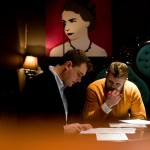 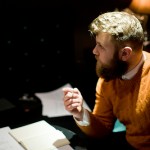 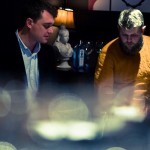 A couple go down the technical route. Ian Griffiths’ from White Lyan in London entry reads like a chemistry experiment while Jon Hughes from Bramble in Edinburgh gets us longing to explore the intricacies of his two lavish-sounding cocktails which he describes with passion and pride. There are a few cases where the story behind the drink really help its creator transition from the ‘maybe’ pile to earning a place in the semi-finals. “It’s so important to read the brief properly. The really good entries come from the ones who take time to explain their thought processes, describing how they came up with the ideas for their drinks. It doesn’t have to be too elaborate but it does make a big difference,” says Sean.

And after close to three hours of cogitating, deliberating and digesting, the shortlist is made.

Now that Sean and Joe have had the difficult task of narrowing down the list, the 14 who made the cut (the 15th entry will come from a separate elimination process in Ireland) will have their chance to bring their cocktails to life in the semi-finals. Taking place at the fab and funky Shoreditch House on 26th February only five will go through to the finals later that same evening.

It’s going to be nail-biting stuff and there’s no denying that Sean and Joe will certainly have their work cut out deciding which of the imaginative drinks go through to the global finals. Luckily, they’ll be joined by Bombay Sapphire Global Ambassador Raj Nagra who knows more than most about what it takes to concoct a winning Bombay Sapphire cocktail. Also on the panel will be Simon Rogan, one of the leading tastemakers in the culinary world. As owner of L’Enclume, awarded Restaurant of the Year 2013 at The Observer Food Monthly awards and ranked number one in the UK in the Good Food Guide, as well as heading up the soon-to-be-opened restaurant at Claridges, what he doesn’t know about making flavours work – whether on the plate or in a glass – isn’t worth knowing about. HOW THE NUMBERS ADD UP…

The number of bars who submitted entries.

What makes Bombay Sapphire spark the imagination? It’s the ten carefully chosen botanicals sourced from around the world. Who couldn’t be inspired by this little lot*:

Who made the cut?
Here are the fab 15 going through to the semi-final

On the day, the 15 will be whittled down to five who will go head-to-head in the final.

There can only be one winner. Check the The Cocktail Lovers to find out who will be representing the UK and Ireland in the global Bombay Sapphire World’s Most Imaginative Bartender cocktail competition taking place in London in May.
See the next issue of The Cocktail Lovers magazine for the full story.

A QUESTION OF TASTE What will the top chef in the country be looking for in a cocktail? We spoke to Simon Rogan to find out.

“I’ll be judging the competition in pretty much the same way I judge a dish on our menus,” says Simon Rogan. This from the chef who holds two Michelin stars for his restaurant L’Enclume in Cumbria and who is filling the very large, much coveted Gordon Ramsay-shaped hole in the restaurant at Claridges means our bartenders will have to be at the very top of their game. “I’ll be looking for character, depth and the showcasing of the botanicals in the cocktails,” he continues. As an exponent of using produce nurtured from seed to plate (Rogan has a 12 acre farm which dictates the seasonal offerings in his restaurants) the use of indigenous ingredients will also notch up a few extra points in his books. “We don’t have as many ingredients to play with as other countries so using what we do have really gets the imagination working,” he reasons.

“I used to be inspired by all sorts – anything from crockery to a piece of artwork,” he says when asked what sparks his imagination when approaching new dishes for his menus. “These days we look at the raw materials, using what Mother Nature gives us. Natural farming and foraging plays a major role in what we offer in the restaurants so florals, herbs and vegetable juices and homemade cordials will also resonate with me.”

Unlike some chefs Rogan is a big fan of cocktails citing them as working better with food than wine. “I see cocktails as an extension of a dish – like a garnish on the side,” he adds excitedly. “At L’Enclume we match lots of local beers and ciders with our menus but in the new restaurant at Claridges we’ll be including more fruit cocktails into the mix as we can draw on ingredients from further afield.” His go-to cocktail? “Gin, ideally Bombay Sapphire with a few dashes of Angostura bitters and a hot, fiery ginger beer – I’m a big fan of the four o’clock G&T!”

Fancy adding a bottle of Bombay Sapphire engraved with your name to your collection? Of course you do. Just answer the following three questions and email your answers to mail@thecocktaillovers.com with ‘WMIB’ in the subject header.
1. How many botanicals are there in Bombay Sapphire Gin?
2. Where does the cassia bark in Bombay Sapphire Gin come from?
3. In which famous London hotel will Simon Rogan be opening his new restaurant?
Contestants must be over 18 and reside in the UK to enter
Entries must be received by Friday 7th March and winners will be notified by email on Monday 10th March.