Back in 1870  whisky was shipped in barrels and diluted by
establishments as they wished. To ensure the quality of his bourbon, George Garvin Brown, a pharmaceutical salesman and native of Louisville, Kentucky, was the first to put it in sealed glass bottles. Moreover, he guaranteed these with his handwritten signature
displayed on the label of his Old Forester bourbon. 140 years later Old Forester is the oldest Bourbon brand in continuous production, it’s survived prohibition and is still made to its original  72% corn, 18% rye and 10% malted barley recipe.

How many direct descendants are involved in the business today?I’m fifth generation and George Garvin Brown was our great, great grand father. There are 38 of us in my generation, nine of us work in Brown Foreman and three are on the board.

Was it always the plan for you to join the business?
Despite the fact I was fifth generation I didn’t ever think I was going to be in the business. My mother is Canadian and I was raised in Montreal and I thought I was going to be a lawyer in Canada. But in my mid-20s my older brother joined the company and I thought what he was doing looked pretty cool. Initially I joined company to sell wine in the Bronx and the other boroughs of New York City just to see how it went. Then I went to the London Business School where I did my MBA between 1999 and 2001. At the age of 32 I moved back to Louisville and I’ve been there ever since.

What’s a typical day in the office like?
I spend half my time in London, a quarter in Louisville and a quarter somewhere else, whether it’s Europe, Asia, Latin America or the United States. I’m interacting in some way or form with our board members, our family members and our senior management team – something I still get a real thrill from. I’m 44 years old, I’ve been chairing our board for 7 years and  I love it – often I still have to pinch myself to remind myself how lucky I am to be in the job I have.

What’s the unique relationship Old Forester has with  prohibition?It’s the only bourbon that continued to be owned and manufactured by and sold by the same owners before, during and after prohibition. There were 10 medicinal licenses in the US during prohibition, but only three were taken up and we had one of them. So we were able to sell during prohibition for medicinal purposes. Not surprisingly prescriptions for whisky sky rocketed during prohibition!

After 140 years why have you decided that 2014 is the year to launch Old Forester in the UK?
We think that Old Forester is the finest bourbon in the market. But we’ve been so successful with Jack Daniel’s around the world that we’ve not been able to nourish some of the gems in our portfolio like Old Forester. It has a very special place in the hearts of the Brown family members, it’s the only brand that we have that has our name on it – in my case it has my whole name on it.
We’re finally at a point, thanks in large part to the success of Jack Daniel’s and our other American whiskies, that we are in a position to bring Old Forester to new markets.  What we find now is every time we bring it somewhere new people look at us accusingly and ask us why we’ve taken so long.

How would you describe Old Forester?
It’s Southern hospitality in a bottle – particularly Louisville
hospitality. It is Louisville’s bourbon and what people drink there is Old Forester. It’s also what we drink as a family when we’re at home.

What do you think your great, great grand father is thinking as he looks down on us drinking Old Forester now?
I think he’s pretty excited, relatively gob-smacked, probably over the moon and enjoying a nice Old Forester! 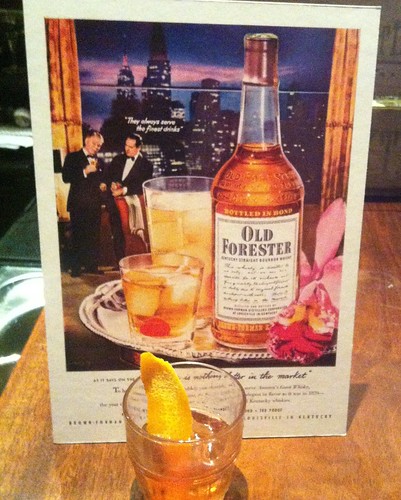