For thousands of years, people have been saying that we eat with our eyes. However, we also drink with our eyes. What this means is that as soon as we set eyes on a drink, a cocktail, say, our mind immediately tries to guess what the flavour might be, how sweet or sour the drink is, and how much we would like the taste. All of these expectations then anchor our subsequent flavour experiences should we come to put the glass to our lips.

Normally, we like food and drink more if they taste as we expect them to taste. Generally speaking, we don’t like surprises, especially not when it comes to something that we are about to swallow and which might poison us. There are, however, exceptions. Diners in modernist restaurants expect (demand even) the unexpected. The food cannot be just as it appears on the plate. There has to be an element of surprise. Take the beetroot and orange jelly dish served at Heston Blumenthal’s The Fat Duck restaurant in Bray. This comes to the table a bright purple colour on one side and bright orange on the other. The waiter instructs the diner that the recommendation from the kitchen is to start with the beetroot. The unsuspecting diner then goes straight to the purple jelly, and remains blissfully unaware that they are actually eating the blood orange jelly, which has a natural purple colour. On the other side of the plate, golden beetroots are used to give the jelly its orange colour. As they say, we eat with our eyes!

The other place where people are happy to be surprised by what they see is in the world of cocktails. Cocktails are undoubtedly more about entertainment and multi-sensory stimulation than nutrition. They are also characterised by their bright colours. Blue Curaçao is one ingredient in the cocktail maker’s arsenal that provides a sensory disconnect between the vivid blue of the spirit’s appearance and the intense orange flavour that fills the mouth on tasting. This is but one example though of surprise, or sensory incongruity, in the glass.

Everyone tends to associate green drinks with sour tastes and red drinks with sweetness. We all assume that more intensely coloured drinks will deliver a stronger taste. But it is important to realise that different colours sometimes carry different meanings for different people. Marketers are partially responsible for this. They have recently taught the young British consumer that a bright blue colour in a drink means raspberry flavour. In Taiwan, the very same colour sets up expectations of mint flavour (think mouthwash, something that you would swill around your mouth, but most definitely would not want to swallow). 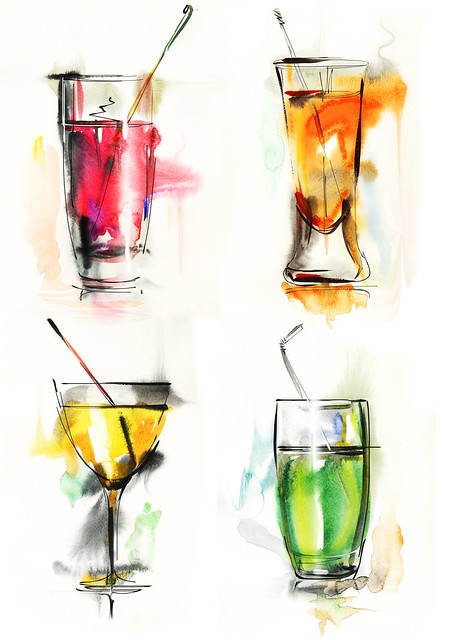 At the Crossmodal Research Laboratory in Oxford University’s Department of Experimental Psychology we have recently been working with some very exotic South American fruits, like the guanabana, lulo and feijoa. Fruits that you would never see in a British supermarket but which could give a cocktail an innovative flavour twist. What we wanted to know was whether, on tasting the juices made from these fruits for the first time, drinkers would be able to guess the colour (they were wearing a blindfold at the time). Can we literally taste colour? Intriguingly, while they were by no means perfect, people were nevertheless significantly better than chance when it came to picking the colour.

One other relevant area that we have been working on recently relates to glassware. Cocktails, after all, are distinguished by the wide variety of glasses in which specific drinks are served. In our internet-based research, we have been showing people around the world pictures of colourful drinks in different glasses. People see a drink served in a particular glass and have to try and guess the flavour. Our results show that, on occasion, the meaning of a drink’s colour depends on the glass in which it is served.

Given that if you change the colour of a drink you can very often change the perceived taste and flavour, we are currently contemplating how to develop a colour-changing drink. In theory at least, the colour change could be used to make the drink taste different without having to alter the ingredients (Note that scientists have recently developed a colour-changing ice-cream.) Wouldn’t it be cool to be able to change the flavour of a drink mid-cocktail simply by changing its colour? However, even if one cannot change the actual colour of the cocktail I am convinced that it will be possible to change the taste/flavour simply by changing the colour of the ambient lighting in the place where that drink is consumed.

Evidence in support of the profound influence that environmental lighting can have on perception comes from a recent study we conducted in which nearly 3,000 people were given a glass of red wine in a black tasting glass. Everyone had to rate the taste of the wine under normal white lighting. We then switched the lighting to a bright red and people rated the wine again. We then switched the lighting to green and got people to rate the wine for a third time. The results were dramatic. Switching the lighting from red to green resulted in a 15% change in people’s rating of one and the same wine. Even though the ambient lighting didn’t change the appearance properties of the wine itself (since it was served in a black tasting glass), it nevertheless dramatically altered people’s perception of the drink. Generally speaking, those who took part in the Campo Viejo Colour Lab experiment enjoyed the wine significantly more under red lighting. So, the next time you find that you are not enjoying your drink as much as you think you should, why not change the colour of the lighting?!

So, while room lights don’t literally have a taste, they can nevertheless modulate the taste we experience in the glass. What is more, with remote-controlled colour-changing LED bulbs now for sale on Amazon for only a couple of pounds apiece, the world of cocktails is likely to get a whole lot more colourful in the years to come.

Professor Spence is head of the Crossmodal Research Laboratory at Oxford University. He is Head of Sensory Marketing at JWT Ad agency, and Professor in Residence at The House of Wolf restaurant in London. Anyone interested in finding out more about the multi-sensory world of flavour should get themselves a copy of his new book, ‘The perfect meal: The multisensory science of food and dining’ published by Wiley-Blackwell.

From issue 13 of The Cocktail Lovers magazine