Ask anyone who’s been following Matt Fairhurst, Benji Davies and Ally Martin on social media over the past six months and they’ll tell you that this year’s UK Bacardi Legacy Three Most Promising campaign has been the best yet.

No offence to those who have been on the journey before – what we mean is, this one has been the hardest to call. People may have had their favourites but everyone was impressed with the hard work, the imagination, the tenacity and passion that these three put into their individual campaigns. Who could really say, with real conviction, who they thought would win? Not us. Or anyone else who was invited along to Clove Club for dinner last night to hear who would be flying to Sydney to represent the UK in the Bacardi Legacy Global Finals.

You probably know by now that Ally Martin won. And as with all these things, we’re so, so happy and proud for him but feeling for Matt and Benji at the same time. Still, speaking to Matt and Benji before the announcements were made, they both commented on how much they enjoyed the competition and how it has helped them in their personal lives as well as their careers. If you see either or them in the next few days, give them a hug, buy them a drink and congratulate them on a job well done. 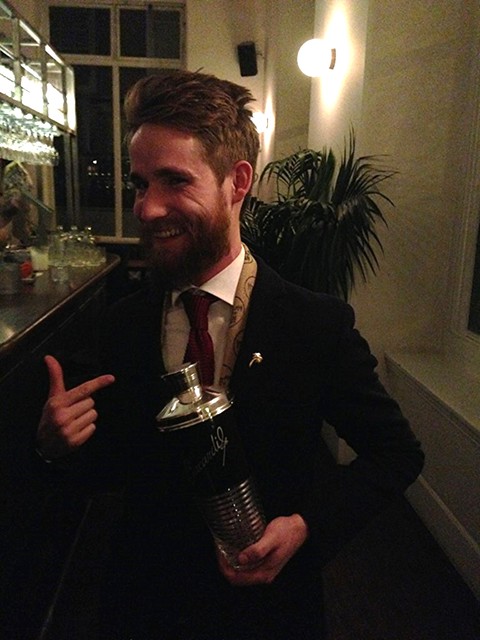 Ally with his prized trophy

As for Ally, well we know he’s going to do a blinding job representing the UK. “All of the others comps focus on innovation, innovation, innovation but that’s not the way to bring the industry forward,” he told us ahead of receiving his coveted trophy. “Bacardi Legacy is more than that. It’s about family and the bar tending community and bringing innovation to the masses. It also gives you confidence and makes others realise its a genuine career. It’s the best cocktail competition around.”

Young Cuban for the win!

Read our interview with Ally here