You know you’ve got to pull something special out of the bag with the Bombay Sapphire World’s Most Imaginative Bartender competition. The name says it all. Forget the beige, the vanilla, the blah, the boring – this is about colour, excitement and daring combinations of flavours. All of which we got in spades in the UK Final.

This year, like always, the competition was about pushing the boundaries with taste, textures and experiences. But there was another element thrown into the mix as well. Bartenders were asked to Find Sublime. What does that mean? Good question. In this particular instance finding sublime meant everything, from the choice location of the competition on the organisers side to the glassware chosen by the contestants. But essentially, it started with the gin: Bombay Sapphire. Created with a unique vapour infusion process used to best highlight the ten botanicals which are sourced from exotic surroundings around the globe.

It certainly did the job for the eight semi-finalists: 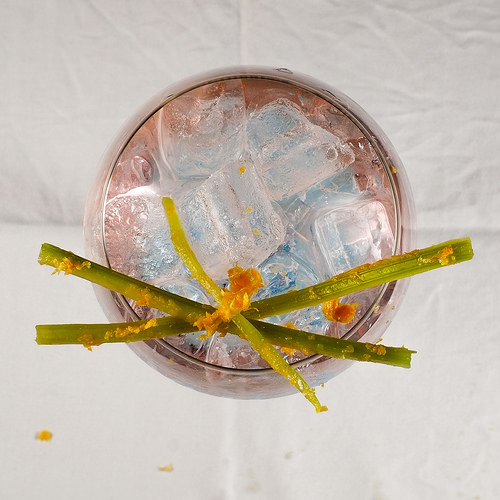 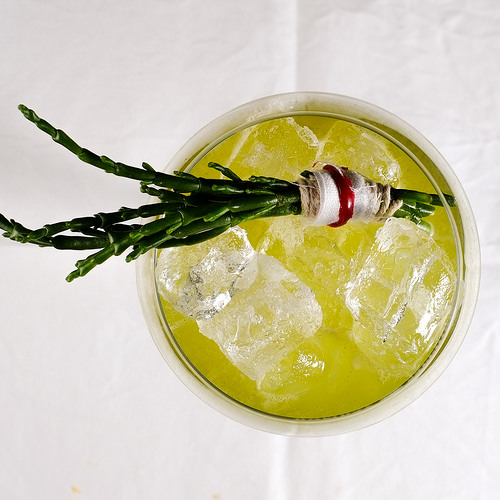 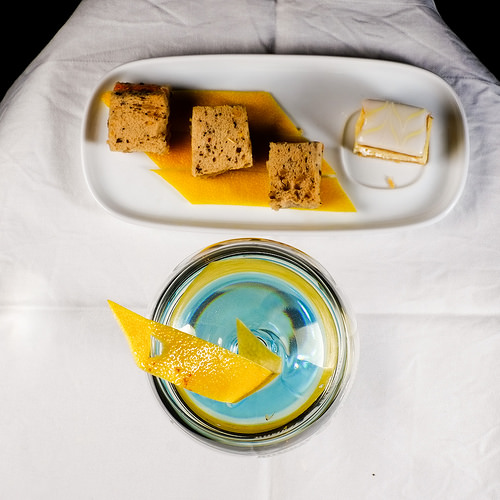 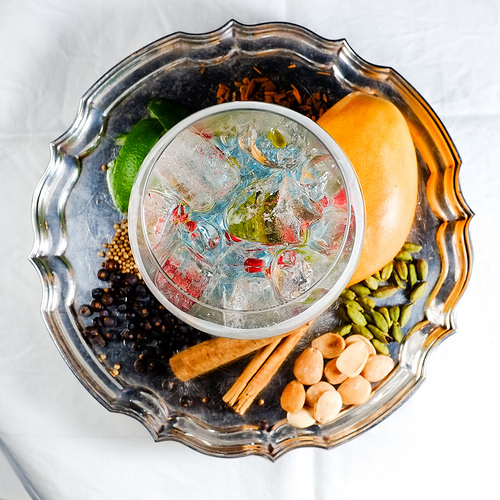 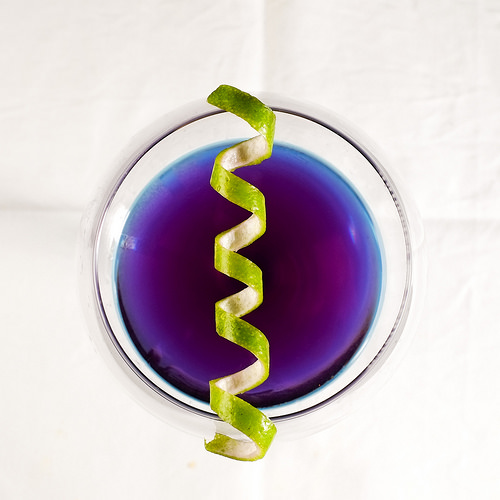 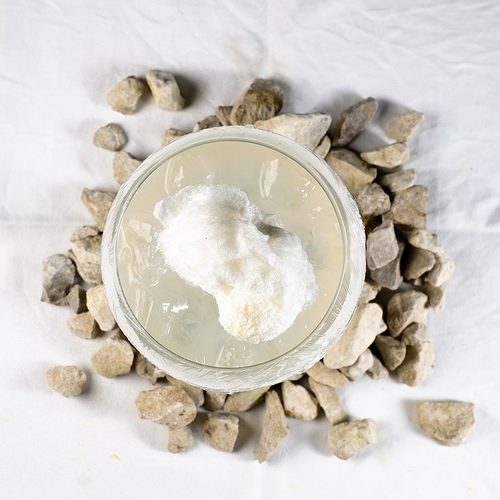 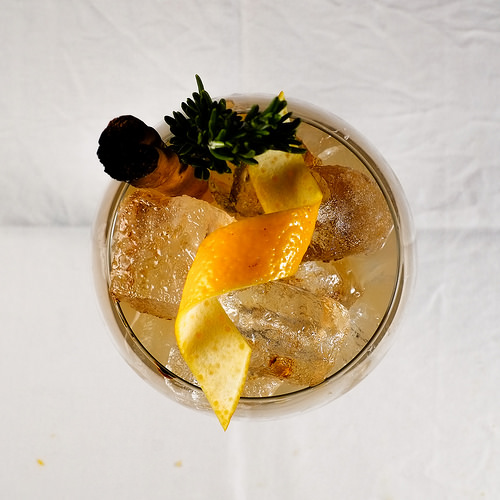 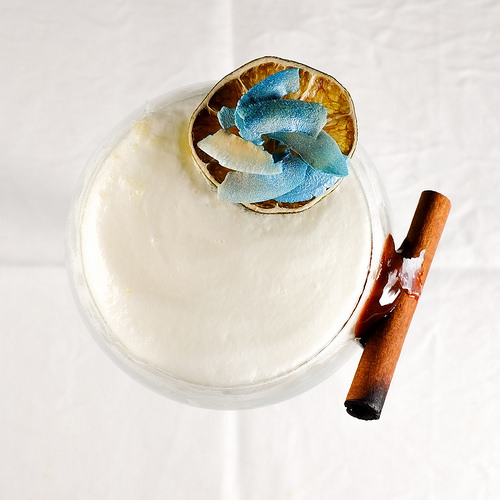 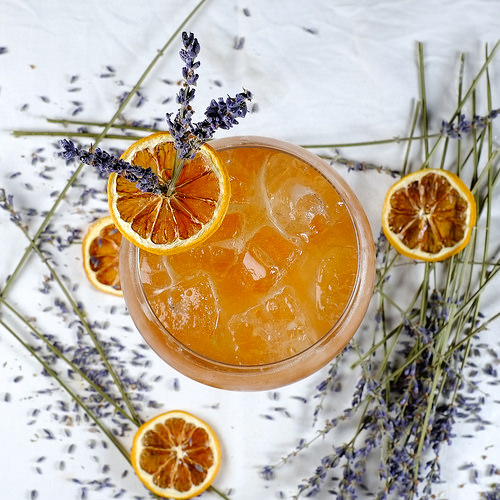 To get through to this stage they were asked to create a gin and tonic. Not a straight gin topped with regular tonic mind but one made to defy the ordinary, taking the two seemingly simple ingredients on to sublime new territory.

And they didn’t disappoint. Their recipes were submitted along with an aerial shot of their cocktail (see above) and the shortlisted contestants were invited to the Bombay Sapphire Distillery at Laverstoke Mill earlier in March to learn everything about the gin and its 10 botanicals.

Joe Schofield got the competition off to a cracking start, cleverly engaging all of the senses with his Rain Reviver. Talk about a show stopper his reimagined version of the classic looked the business with its edible cloud suspended above the drink, tasted fantastic thanks to its careful balance of mineral-based rain tonic and smelled amazing, bathing the room with a wondrous fresh rain aroma. 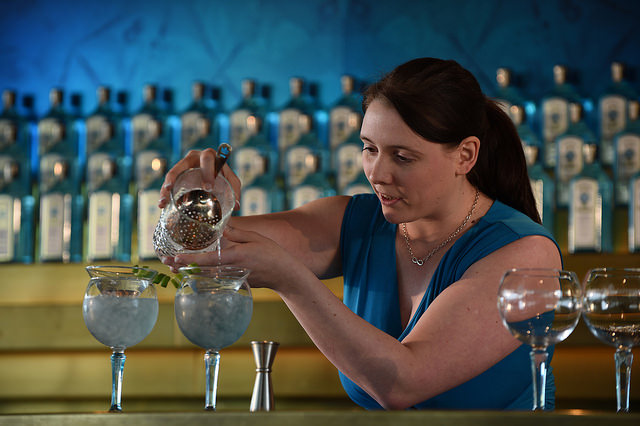 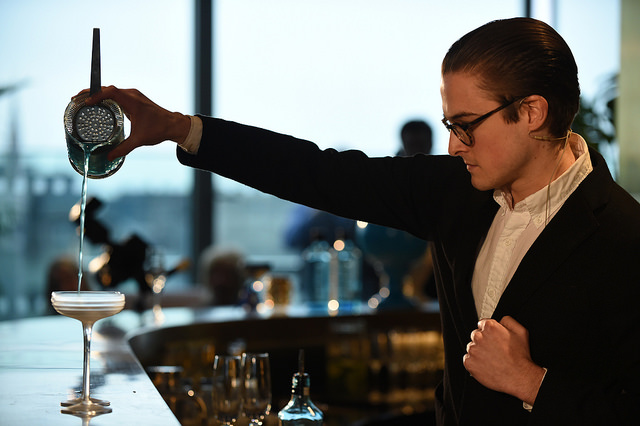 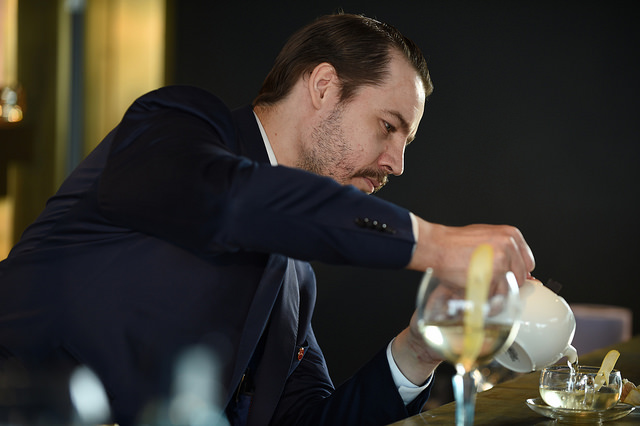 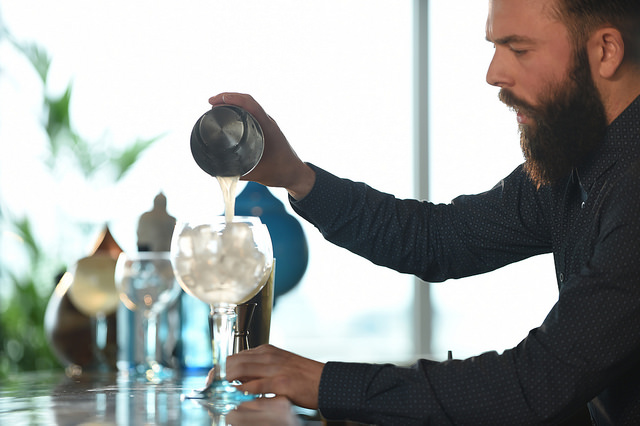 Sam Kirk scored a blinder in his first ever competition, taking us to India with his deliciously fragrant Once Upon A Time In Bombay, a mango lassi gin and tonic mash-up laced with fruit and exotic spices, while Troels Knudsen found inspiration for his hot gin and tonic a little closer to home, basing his cocktail on the comforting camomile tea his grandmother served to him as a child. To accompany his High G&Tea, he served up dainty salmon and cucumber sandwiches, bound with Bombay Sapphire botanical flavoured butters.

Dan Berger gave good chat on the heritage of Bombay Sapphire and the rationale behind his drink before adding an intriguing mix of corn, almond, lavender, orris and a selection of teas (Earl Grey, Green and Jasmine) for the base of his Portal to Exploration cocktail which was topped with a tonic foam. Simone De Luca also went for a foam to top his drink but his was a curry/coconut combo to complement the West African flavours in his Bonobo’s Sapphire, inspired by the music of Bonobo. 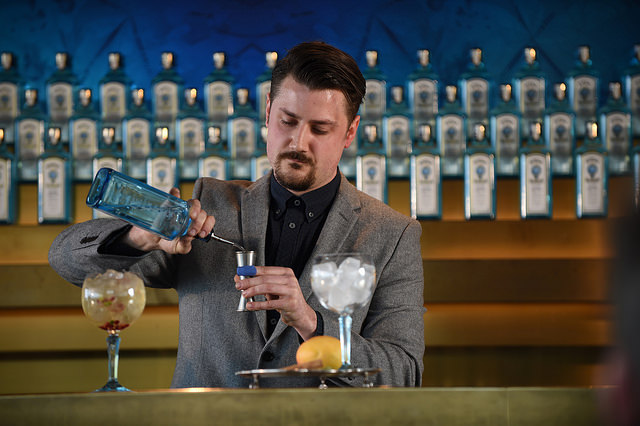 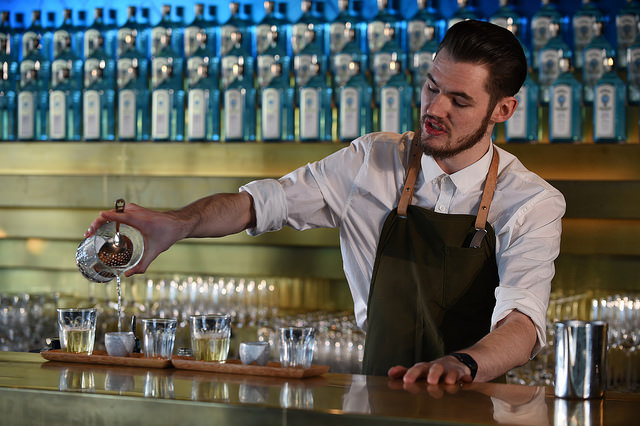 Frankincense water, nettles and lime juice, topped with tonic and a drizzle of sarsaparilla gave Josh Reynolds’ The World Over a discernible difference – added to which his decision to throw the drink added a theatrical flourish and perfect dilution. There was a touch of the theatrical about Lee Morris’s cocktail too. His Tralfamadorian Literature was a wondrous, complex cocktail of lecithin solution, orgeat, frozen Bombay Sapphire, stonewashed Bombay Sapphire with mint and flintstone, Himalayan pink salt, liquorice bitters, toasted coriander and juniper syrup built in small glasses and presented in a beautiful pared back, zen-like way of three small vessels lined up on an elegant tray.

Last up was Sian Buchan, looking resplendent in a dress which closely matched the vivid blue of the Bombay Sapphire bottle. She carried the blue theme through to her Officer’s Only cocktail, a crowd-pleaser of a mix between a gin and tonic and a martini coloured with a red cabbage reduction, reflecting the cabbage supplies taken on historical ships to ward off malnourishment. 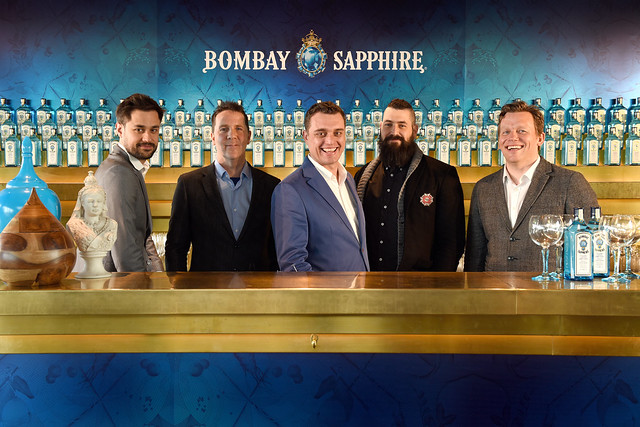 That was it from the competitors, next it was down to judges to digest and deliberate. The panel made up of Sean Ware UK Bombay Sapphire Ambassador; Richard Wood World’s Most Imaginative Bartender UK & Ireland Winner 2014; Craig Harper, Fever-Tree, and Jason Hawkes, aerial photographer – each brought their own extensive experience and distinctive palate. Deciding who would go through wasn’t going to be easy…

It was left to Simone, Joe, Josh, Lee and Dan to dazzle and delight the judges with one last drink. The brief? To create one last showstopping original drink, this time inspired by their sublime surroundings in the UK and taking inspiration from their experience to the Bombay Sapphire Distillery at Laverstoke Mill. 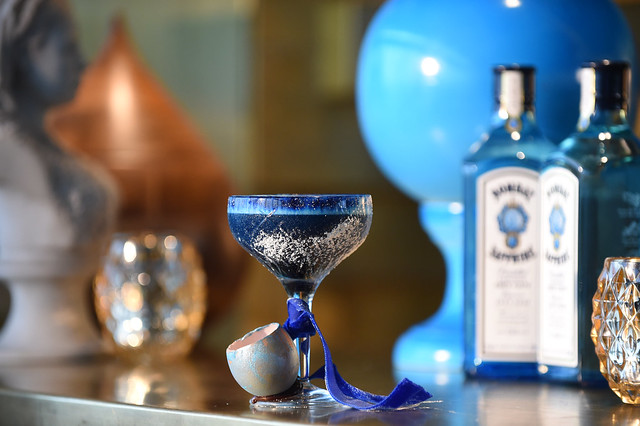 Simone dedicated his cocktail to fellow Italian Ivano Tonutti Master of Botanicals at Bombay Sapphire. His drink, Il Botanico, combined all 10 botanicals found in the gin, some were crushed, others were ground or spritzed in his vivid blue twist on a classic gin sour taken to new heights with one flamed blue egg shell filled with kumquat, another topped with liquorice electric bitters. Finally, he tied a ribbon to the stem of the glass onto which he doused juniper oil so it became a part of the experience. 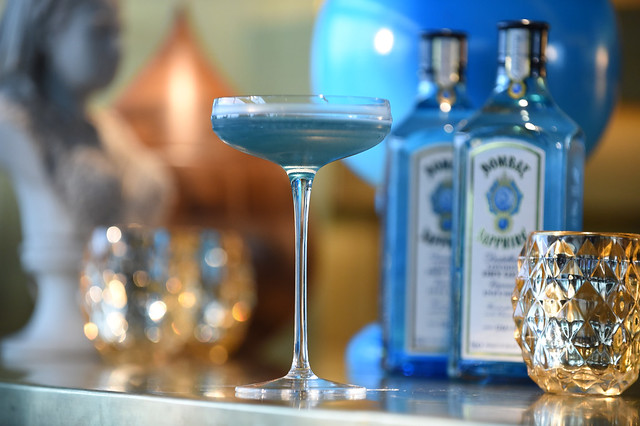 Another blue drink came up next but where Simone went all out with the garnish, Joe stripped his back to nothing, allowing the simplicity of his cocktail to shine through. The drink itself was inspired by the river: the River Thames which we could view from our vantage point in the majestic Rumpus Room at the Mondrian, the same river he sees every day from his bar at the Savoy, and the River Test running through the distillery at Laverstock Mill. His shimmering sapphire-coloured cordial (a secret recipe) was created to embody the stars, lights and river. 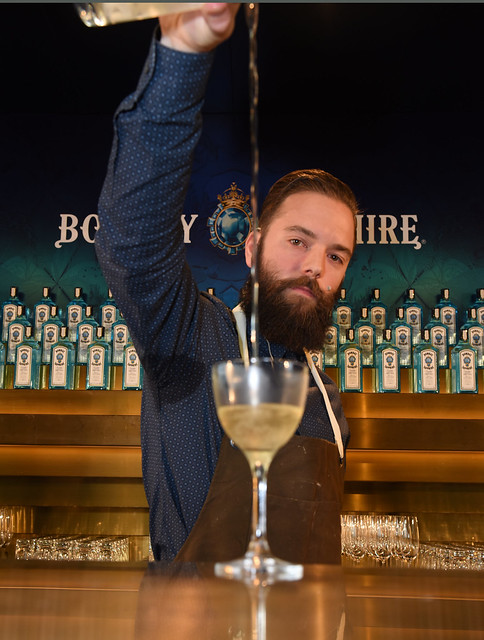 Josh and his Kneading Bombay

Josh’s Kneading Bombay called on a baked bread tincture, citric coriander water for texture and marigold syrup inspired by Nik Fordham’s love for foraged ingredients. Beautifully balanced, the drink was completed with a touch of sesame oil for increased texture and a delicious aromatic boost. 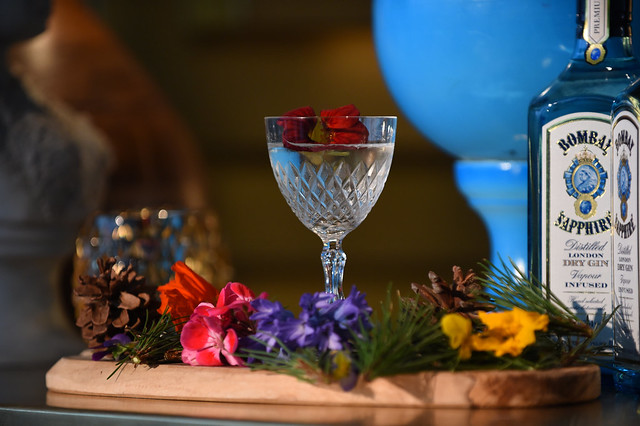 The award-winning sustainability factor at the Bombay Sapphire Distillery struck a chord with Lee Morris who based his cocktail on the woodlands teeming with life around Laverstoke Mill. His Woodland cordial combined bruised pine, geranium and angelica which he stirred into Bombay Sapphire gin. The fascination of the woods continued in his garnish, a bright and beautiful combination of pine, bluebells, geraniums and nasturtiums to make the point that some things in the woodland are edible, some things not. 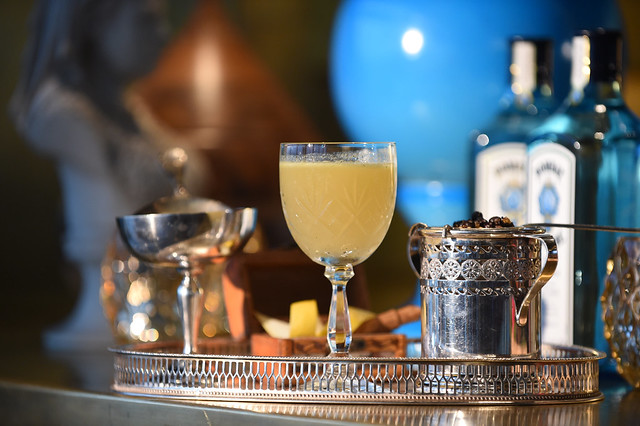 Last up came Dan who, like Simone, looked to Ivano Tonutti for his inspiration. He built his recipe by guiding the judges and audience on his tour of Borough Market in search of his ingredients. It started with chestnut honey, then came olive oil for texture. Dhania, (Indian coriander seeds) one of the key botanicals in his cocktail was found in the spice market, while the first flush Darjeeling tea was picked up on a neighbouring stall. The seeds were smashed and toasted and infused in honey overnight, then brought together with Bombay Sapphire, the tea, some lemon juice to balance the flavours and a smidge of marjoram.

Dan’s slick but very engaging and informed presentation and tip-top tasting drink won him the competition. “It’s a great feeling that people like my inspiration and the drinks I’m producing,” he said excitedly after the announcement was made. “For me, the most exciting part was working with the botanicals in Bombay Sapphire and finding a way to push them through the drink to create a palatable cocktail full of rich taste and textures.”

We’re expecting him to do sterling work in the Global Final. Check back on 4th June to find out more. 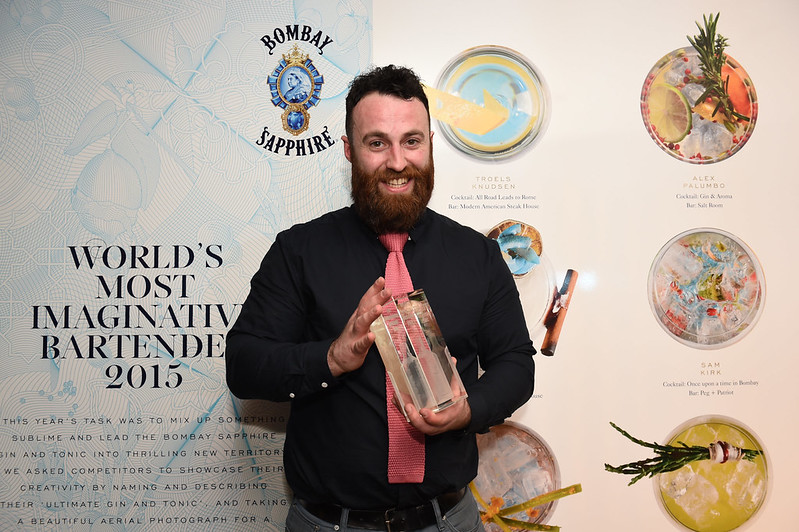 • Gin and tonics can be many things but boring isn’t one of them.

• Drinking blue cocktails made with too much food colouring can stain your mouth and make you look like The Joker.

• It is possible to recreate the smell of rain.

• Blue cocktails are nothing new – there are at least three listed in The Savoy
Cocktail Book – all using blue vegetable extract.

• There is no limit to imagination when it comes to inspiring cocktails.

Shake all the ingredients with ice and double strain into coupe. Garnish with discarded lemon twist. Served with toasted Bombay Sapphire botanicals, Darjeeling tea leaves and a small exploration box packed with botanicals.

Add all the ingredients into a stirring beaker then stir and strain into a frozen glass. Serve on a wooden board with almond powder and 5 drops of sesame oil.

Josh’s gin and Tonic Serve: The World Over

Add the ingredients together, stir and serve. 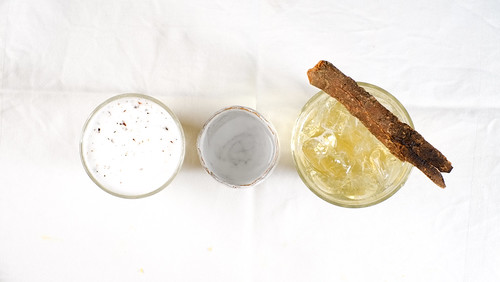