The third day, was all about flavour and pretty close to bartender heaven.

A short drive into the country took us to La Ribaudière restaurant, famous in the region for its two Michelin Stars ,courtesy of chef Thierry Verrat. Anyone who visits is in for a special experience, but for our bartenders it would be one they wouldn’t forget. They spent the morning in the kitchen with Verrat watching, learning and trying their hand at preparing some of the G’Vine influenced dishes he had specially created for lunch. And don’t think we didn’t do our bit too, after all someone had to sample those five courses. We particularly liked the sea bass tartare with the subtle addition of a G’Vine frosting. Our stand out dish though was the chicken with G’Vine jus with lemon and G’Vine mashed potato. Gin in mashed potatoes? Trust us, it’s the future.

Following the gastronomic morning, the afternoon presented more elegant rewards for the senses. Arriving at Bache-Gabrielsen all we had to do to smile was smell the richness in the air. This cognac house, founded in 1905, is still run by the descendants of the Norwegian founder Thomas Bache-Gabrielse.It may be an intimate family run concern but that doesn’t mean small, it’s the sixth largest producer in the region. And, of course, you can’t visit a place like this and not taste a drop or two. We fell in love with the Hors D’Age. Incredibly rounded, with an almost liqueur-like mouth feel, full of a diverse flavours, nutmeg, cinnamon and red fruit, with a generously long finish.

In the evening it was time for the bartenders to shine and to do what they love doing best. Each got behind the bar at Maison Villevert to recreate their winning G’Vine Perspectives serves (see above).

We enjoyed a taste of them all and it was easy to see why they were all winners. Ingredients ranged from a sweet wine reduction to fresh sage, and garnishes from jasmine leaves to home made celery salt. Unusually for a cocktail competition the bartenders weren’t competing for a grand title. Instead this was about show-casing their creations.  And remembering each drink had been originally created to salute an inspirational figure we like to think the likes of Coco Channel, Frank Lloyd Wright, Steve Jobs, René Maigret and bartending legend Ada Coleman would have been impressed.

There was one last piece of mad mixology magic still to come courtesy of Mr Alex Kratena. Usually to be found at the multi award-winning Artesian Bar, Alex was one of the original judges of the competition and also had a little (make that large) surprise up his sleeve. Aided and abetted by G’Vine winners Nathan O’Neill and Osvaldo Vazquez, he worked like a man possessed, pulling together ingredient after ingredient; both G’vine Floraison and G’Vine Nouaison, vermouth, fresh juices, June liquer, tequila, orange bitters, grapes… And we’re not talking jigger measures here – think one full tumbler for one shot. As for the serve, well, you know those huge martini glasses, about a metre high, that are usually reserved for decoration? Alex had other ideas and used one to present his creation. It was damned big (more than enough for the 40 or so guests to share) and, better still, it was damned good. 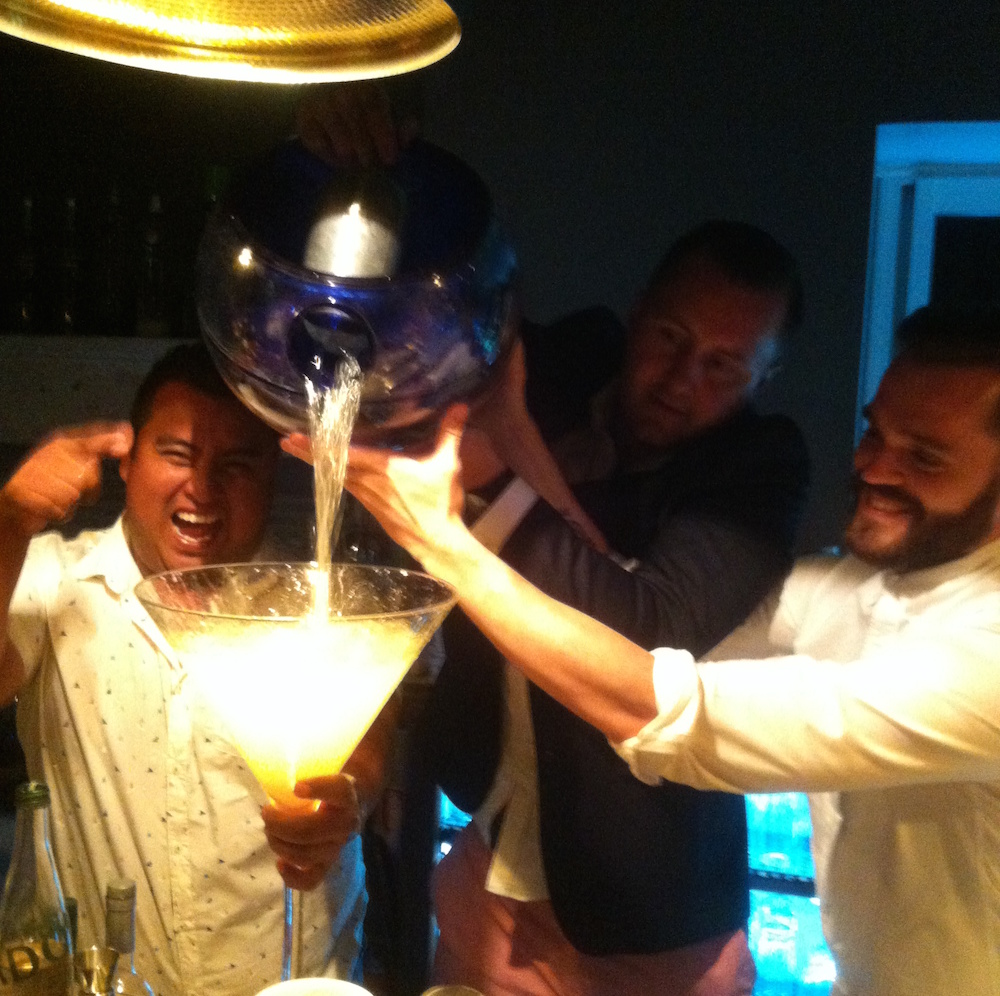 What is an unconventional thinker?

“A person who challenges convention is someone who is constantly looking for new and imaginative approaches in anything and everything they do.”

Alex Kratena, Head Bartender of Artesian at The Langham

“Coco Chanel was more than just a fashion designer. She was a strong woman who went against tradition in her creations to liberate women in the way they dressed. I’m celebrating her elegance with my cocktail, G’Vine No 5 (G’Vine Floraison, French white aperitif wine, lemongrass and elderflower cordial mix, lemon juice, rhubarb bitters and jasmine-infused aromatised water).

“I thought about a lot of unconventional people but then realised the person who had inspired me most was my former boss Ben Simpson. He was a bartender who went against the fashion of the time for bars with trendy styles and instead went for a classic approach. I owe so much to him and my cocktail reflects his classic style. I call it The Lilly Fleur (G’Vine Floraison, Pinot Grigio, Poire William, Wolfschmidt Kummel and magic acid solution).

“There’s something clean and perfect about the designs of Steve Jobs, especially the iPhone. When everyone else was just concentrating on what computers did he wanted to create an experience. I wanted my cocktail Bricolage (G’Vine Nouaison, Tio Pepe Fino sherry, Aperol and Bittermans Boston Bitters) to be simple and elegant like his creations.”