The 10 finalists, from left to right:

There’s so much more than having the nous to create a gobsmacking drink to being a World Class bartender.

Obviously being talented in the drinks department helps. But that’s just one component in the overall package. To be in with a chance of winning, those taking part also have to demonstrate creativity, ingenuity, showmanship, composure and charm, not to mention product knowledge, appreciation of balance and flavour and ace presentation skills. All that without coming over too arrogant or cocky.

Hard work or what? But so it should be, there’s plenty to play for. We’re talking a V.I.P, once-in-a-lifetime trip to Cape Town for the Diageo Reserve Brands World Class Global Finals in September, a £10,000 marketing fund for the bar they work in to create an exclusive World Class ritual serve, and perhaps even more importantly, the career changing opportunities and exposure winning a competition like this brings. 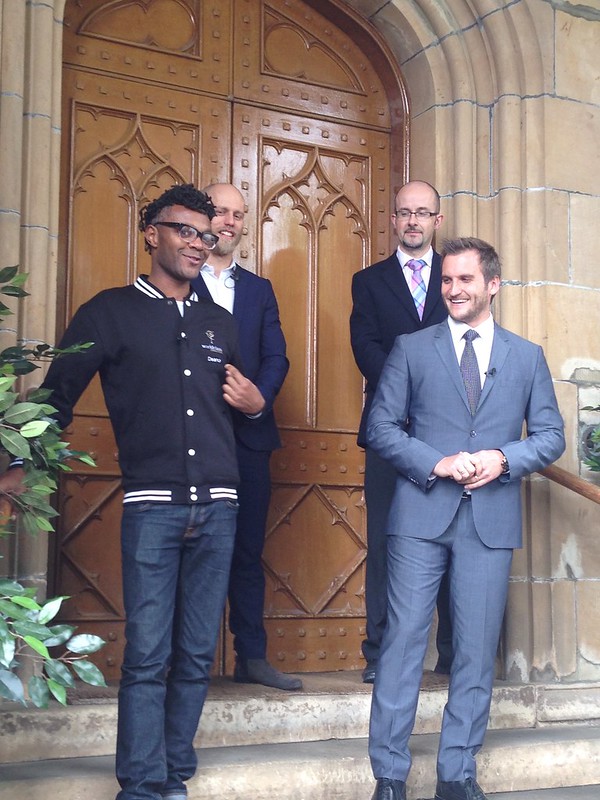 Welcome to Drummuir, with Deano Moncrieffe, Dan Dove, Tom Soden and the keeper of the castle 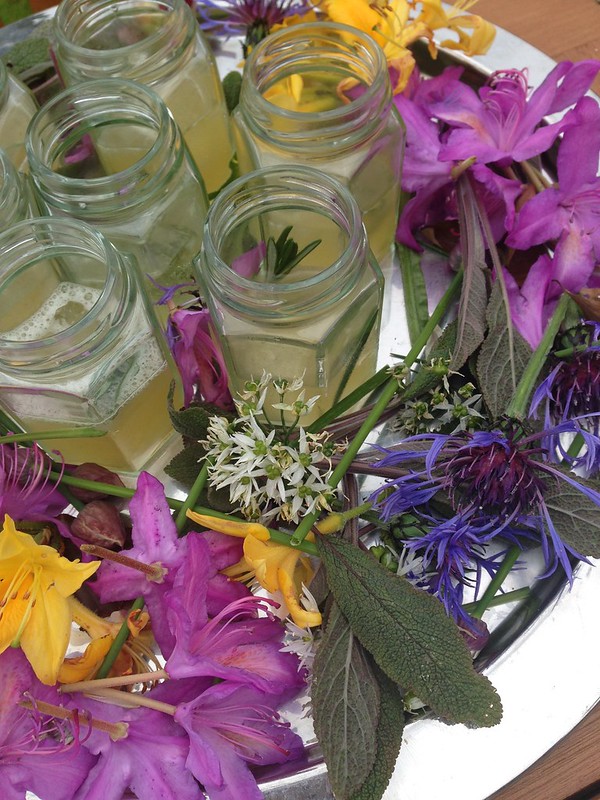 With that in mind you’d think that the ten finalists touching down in Aberdeen earlier this week for the World Class GB finals would be all diva-ish and competitive. Not a bit of it. From the get-go there was an air of camaraderie and genuine support that you don’t find in any other industry. It began at breakfast over Bloody Marys and cracking egg dishes at The Perfectionists’ Café in Terminal 5 before we set off to Speyside and from what we could see, looks like it will carry on throughout their careers.

So, where better than a castle to set the scene for the finalist who would later be crowned king? (no women made the cut this year…) Drummuir Castle not only worked like a charm to impress but also provided the ingredients foraged for the first task immediately after lunch. For the Ground to Glass Challenge the bartenders had to create a cocktail to match both the main and dessert devised by acclaimed chef Lee Westcott of The Typing Room in London, using shrubs, leaves and roots picked by leading Scottish forager, Mark Williams. 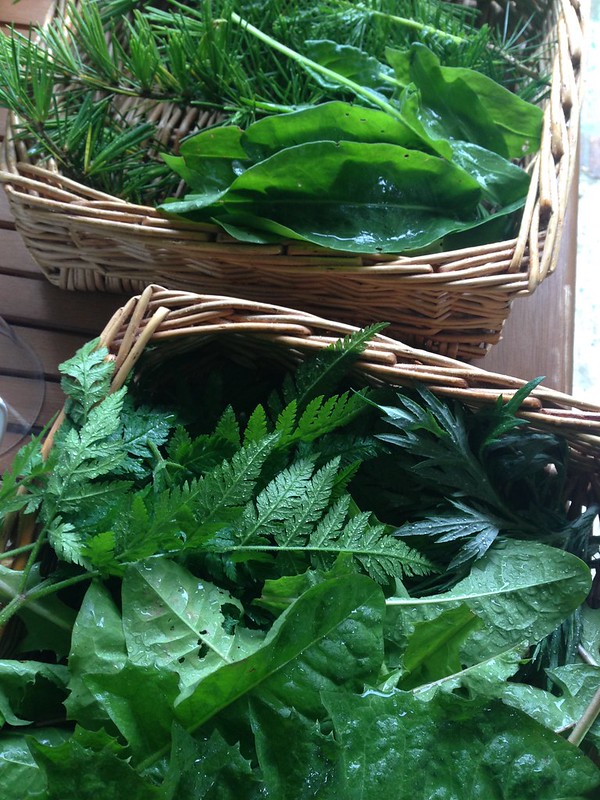 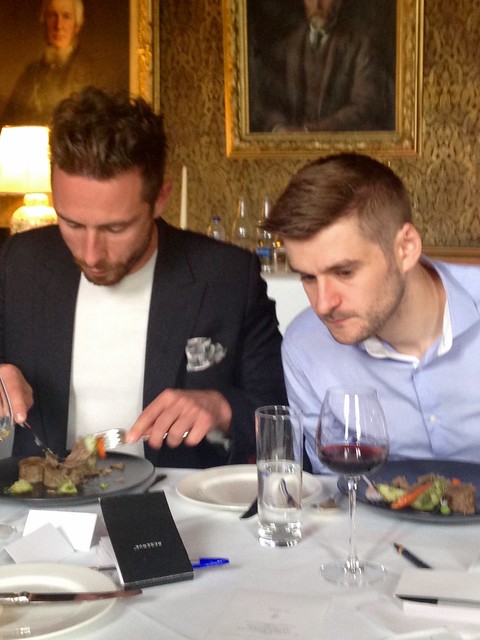 A snapshot of some of the drinks:
There was a whole lotta sherry action going on… Jamie prepared a long alcoholic jus to pair with the main, choosing Don Julio Añejo as the base and adding crushed pink peppercorn, sweet sherry, vermouth, orange and elderflower liqueur, while his dessert cocktail was a deep, rich, contemplative Old-Fashioned style drink made with Johnnie Walker Blue Label, crushed barley cooked with Benedictine and Creme de Banane.

Lorenzo zoned in on the grain featured in Haig Club and added mint syrup, egg white, pine soda water and black pepper to complement the components on the lamb plate. For his dessert he chose Ketel One, elderflower, tansy sugar syrup and Olorosso sherry. Tim went for a full-bodied drink to square up to the lamb, balancing Zacapa rum, Olorosso sherry, lemon juice, egg white and a sugar syrup made with spruce tips. His dessert cocktail called on Don Julio Reposado, Cocchi Torrino, Creole bitters and a sweet cicely straw (see below). 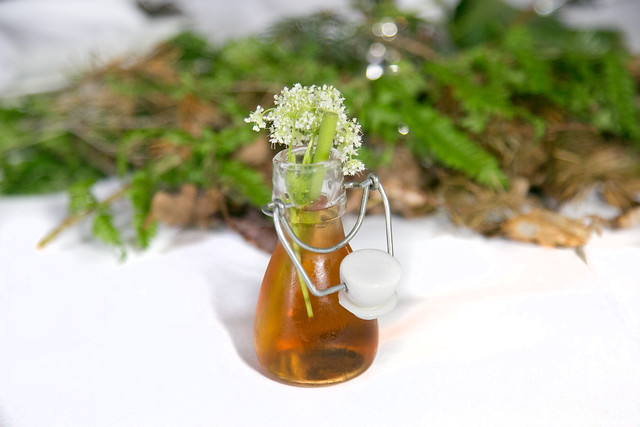 Jon wanted to bring a red wine element to his drink and achieved this with burdock root, PX sherry, Bulleit bourbon cinnamon and orange; for the dessert he kept things light and fresh with Tanqueray No. TEN, cicely soda, egg white, lemon juice and flowers to “bump up the flavour”.

More sherry love came from Ali who chose to play on juniper and thyme to cut through the fattiness of the meal with a cocktail comprising Tanqueray No TEN, Tio Pepe, a dash of Fernet Branca and blackberry leaf and sweet cicely syrup. His garnish of cicely flowers tied to the stem of the glass with chives added a savoury aroma which paired beautifully with the lamb. For dessert he went for Don Julio, lemon juice, thyme and ginger syrup and a pinch of saffron for colour.

The next two challenges came the day after. First to Cragganmore distillery for arguably the toughest part of the competition, the Deconstruct/Reconstruct Challenge. 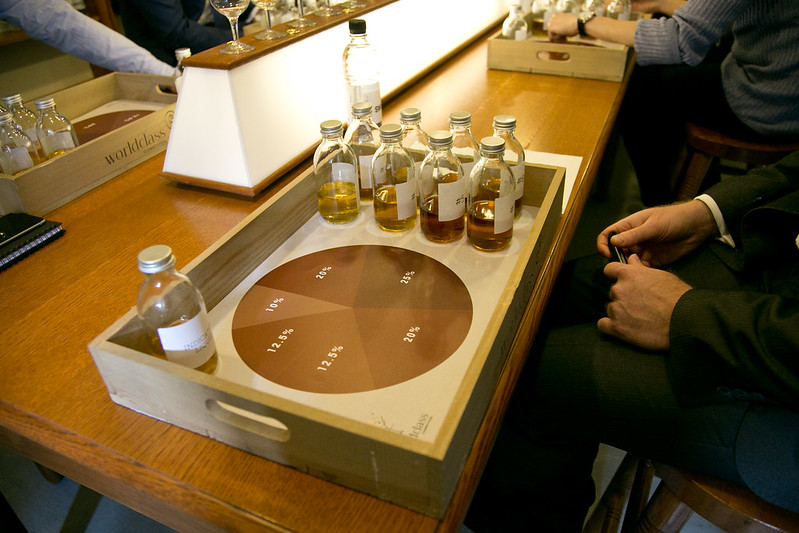 Talk about a challenge, get your heads around this: here’s where the competitors were presented with an ‘Indicator Liquid’ containing a unique World Class blend, created by Master Blender Jim Beveridge. So far, so good for the tastebuds but not so great when you hear they were then asked to identify the exact make up, by percentage of the liquid. And if that wasn’t tough enough, two additional whiskies were thrown into the equation for them to sniff out. That done, they then had to identify where the World Class Blend would sit on the whisky map (see above). Did we mention they only had an hour to do this? Hey, this is World Class…

Challenge 3: The Signature Round

Back to Drummuir for the pièce de résistance, the Signature Round. This is where we got to see the bartenders do what they came for: dazzle the judges with their patter, precision and poise. 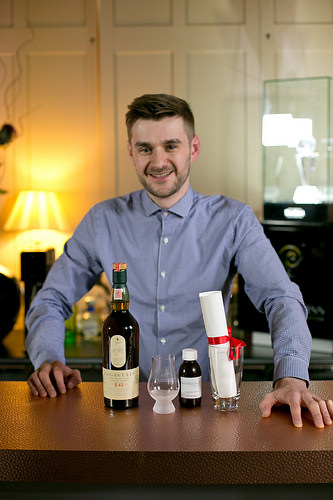 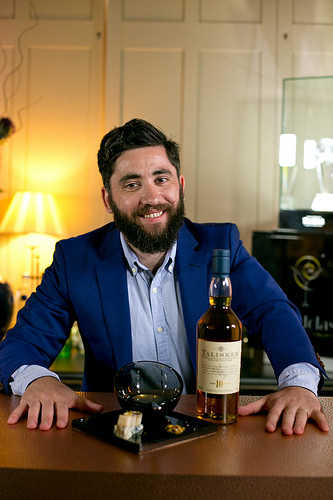 Kyle got things off to a very strong start with two amazing cocktails, Peas & Love (Don Julio Blanco, yellow Chartreuse, egg white, lemon juice and pea and mint cordial), served on a coaster made up of pictures from his 10 years in the industry and an envelope of three photographs from his time in Speyside. His second cocktail was another hit, this one based on a Long Island Ice Tea (Lagavulin, coco cola syrup, citric acid solution and Fernet Branca), served in a medicine bottle.

Jamie aka the Cocktail Hobbit came suitably armed with a cane concealing a wee dram of the good stuff, before revealing a suitcase to present his An Unexpected Journey in Mr Jones’s Travelling Tanqueray Kit (Tanqueray No. TEN, cordial of birchwood infused with kaffir lime leaf, sugar and citric acid). Cocktail number two kept the high standard going with the Skye-Highatrist (Talisker 10 year old infused with walnut oil, beetroot spirit, leatherwood honey with sea salt and a dash of chocolate bitters). The cocktail was sipped from a spoon for increased aeration and added aroma. 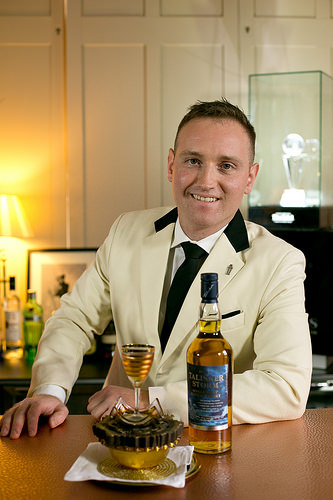 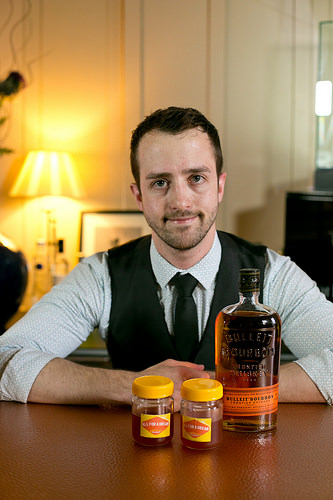 Rather fittingly, Luca based his Seven Hundred & Fifty-first cocktail on the most iconic cocktail on The American Bar menu, the White Lady which he made whilst performing a Twenties-style rap he’d written to explain the ingredients and method for his drink (Don Julio Blanco, orange and citronella syrup, aloe vera and rocket leaf and egg white). He followed this with the Covent Garden Host (Talisker Storm, camomile infused artemisia, Cherry Marnier and smoked oak sea water). Not to be outdone in the performance stakes Tim Laferla entered the room pushing his ingredients on a trolley while dressed in a rather fetching kimono. He kept the Japanese theme going with his Man on a Mission cocktail, created to hit all five taste receptors (Johnnie Walker Platinum Label, Yuzushu, Matcha, lemon juice and sesame seed syrup), then looked to his Australian roots for his next cocktail, All For A Dream (Bulleit Bourbon, Campari, Cocchi, cold drip coffee, Vegemite bitters, served in Vegemite jars). 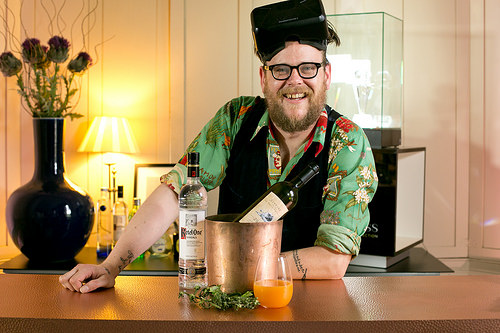 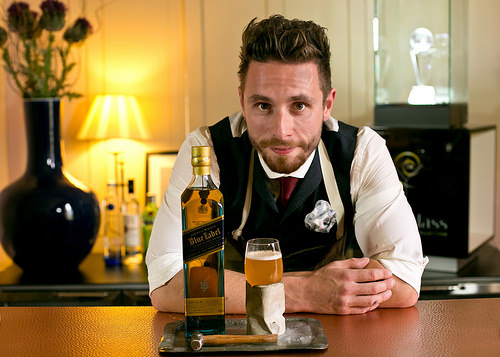 Benji revealed his passion for flower arranging in his Say It With Flowers cocktail (Tanqueray No. TEN, Campari infused with rosehip, white port and lavender bitters). He then switched things up with Sipping In The San Donato Sunshine (Ketel One, fig liqueur, Keystone Crescent sour mix, apricot and basil purée and Tuscan white wine), served in a bottle and lavishly garnished with a headset projecting images of the Tuscan countryside.

Next, Ali referenced the friendships and teamwork that had been formed on the trip and linked it to the family behind Ketel One, the base for his Anty-Figmatic cocktail (Ketel One, ant-infused with fig leaf syrup and Cacao Blanc). His garnish? A neatly folded £10 note thus creating an ant-tenner (geddit!) For his second drink, he played with weight, serving his Hitting Lock Bottom drink in a wine glass set in concrete (Johnnie Walker Blue Label, bergamot syrup, Sweet Cheeks cider and Fernet Branca, topped with Ruinart Blanc de Blanc).

Seasonality, simplicity and balance were the three words Lorenzo referenced for his My First Bicycle cocktail (Cardhu 12 year old, charred lemon, Mastiha, fig leaf, egg white and a float of oxidised wine). He replicated the feeling of instability one experiences when first riding a bike by serving the drink in a rocking vessel. His Sunday Toast meanwhile was inspired by tradition and family (Zacapa 23, Fernet Branca, brioche syrup, freeze-dried cherry, coco nibs, dried tarragon and coffee beans). 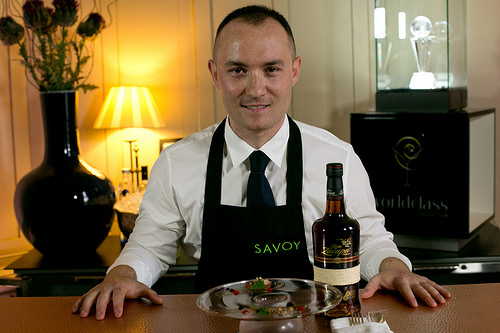 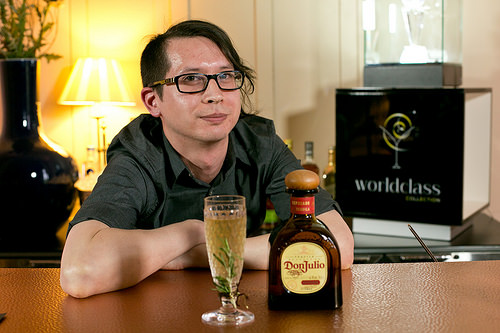 Jon told us of his fondness for stirred drinks but here he wanted to create something light and summery with layered flavours. Which he did with his El Lirio de la Huerta (Don Julio Reposado, apple brandy, apple, rosemary and lemon thyme shrub and acacia honey). The La Serenita on the other hand was a Dirty Martini, aperitivio style drink made from Ketel One Citron, olive oil washed Ketel One and olive oil.

And the clever, great tasting drinks kept on flowing with Ben’s mash-up of a Mai Tai and Negroni – hello ‘Mai Zegroni’! (Zacapa 23, Campari, velvet falernum and an orange twist, served with almonds infused in Tanqueray No. TEN, sweet vermouth and citrus). He then took his next drink on to dizzy heights with the Stratospheric (Tanqueray No. TEN, Ciroc Red Berry, apricot liqueur, rhubarb syrup, lemon juice, apple juice and plum bitters), presented on the mother of all plinths to replicate his bar Cloud 23, the tallest residential building in Manchester. 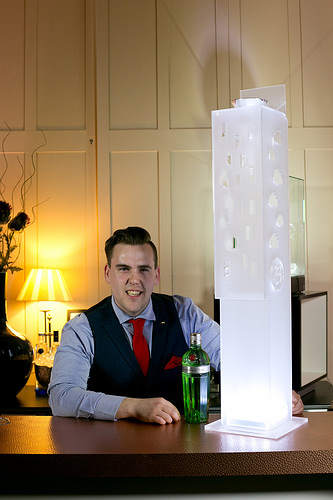 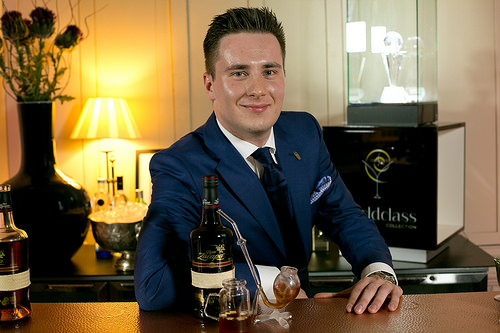 Michele wrapped things up nicely with the Plot Twist, (Haig Club, smoked salt and Milano-Torino Marmalade, served both in liquid form and as a jelly). The very last cocktail of the World Class GB 2015 finals was Michele’s Best Mate, based on the sharing element of Yerba Mate tea (Zacapa, sweet and sour mix with lemon verbena, Yerba Mate and Reisling; egg white and bitters, served in a glass pipe).

Then it was over. Time for a splendid Scottish dinner (kilts and tartan sashes a-go-go, plus bagpipes, haggis, tatties and neeps, some comedy Ceilidh dancing, plus plenty of drams from the library of course), followed by a morning of bracing outdoor antics including clay pigeon shooting before the announcements. 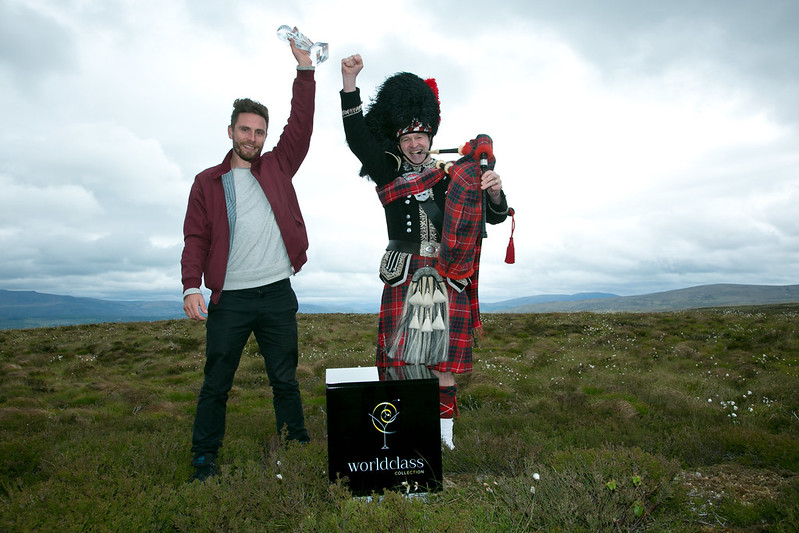 Forget drum rolls, instead we heard the sound of bagpipes as Spud the Piper dramatically appeared through the moor before Ali Reynolds was crowned World Class GB 2015 winner. Cocktail lovers of GB, trust us, he’s a first class act.