Wine and cheese, there’s a flavour combo we’re all familiar with. But when was the last time you paired your cheese with gin? Hmmm, thought so. Which is a travesty given how beautifully the two work together. We found out just how well a few weeks ago when the good folk at Beefeater Gin invited us to Madrid to see how the tastes marry for ourselves.

The gin in question was Beefeater Burrough’s Reserve. Or more specifically Beefeater Burrough’s Reserve Edition 2. Not your average juniper tipple it has to be said. This soft, yet complex oak-spiced gin created by Master Distiller Desmond Payne is what some of the feisty young gins long to be when they grow up – richer, smoother, full of taste and infinitely more mature. The four cheeses chosen to go with it, Goddess, Little Wallop, Fairleigh Wallop and Blue Monday, were equally superior and came courtesy of Alex James (yes, him from Blur).

We spoke to the two great tastemakers about their products and why they work so well together.

Desmond Payne on Burrough’s Reserve, teaming up with Alex James and bringing back the savouries course…

I wanted to challenge the status quo as gin being drunk as a  G&T before dinner.

If I’m a gin drinker I don’t want to drink cognac or port after my meal, I want to drink gin. Burroughs Reserve is a way of drinking gin on that occasion – it’s a cask-rested gin designed for sipping.

The gin itself is our award-winning London Dry recipe.

But it’s distilled in the small original 19th century still that belonged to our founder James Burrough. Beefeater Burrough’s Reserve Edition 2 is characterised by its notes of juniper-led spice that develops into soft hints of oak, dried fruit and liquorice.

Beefeater is a brand whereas Burrough’s Reserve is a totally different concept.

The first thing I learned from Burrough’s Reserve Edition 1 is the gin was going to be different, so the resting, ageing, even the colour is different. It has its own individual character and its own expression. Edition 2 wasn’t necessarily intended from day one but it was always an option to evolve. 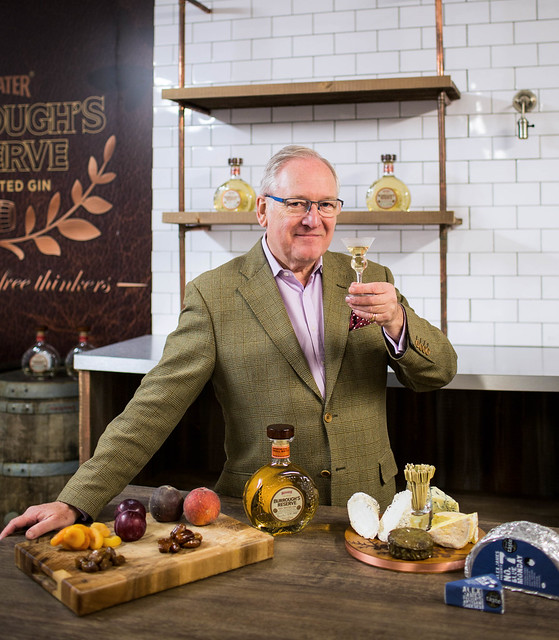 ‘What if?’ is a principal I always use.

Beefeater 24 came from ‘what if I add tea, how will it work with everything else in the family?’ Burrough’s Reserve Edition 1 was the result of ‘what if we scaled things down?’ And for Edition 2 it was, ‘we’ve rested Burrough’s Reserve in Jean de Lillet casks from Bordeaux, what if we tried it in different casks?’

We could have used bourbon casks.

But that would have taken things in a different direction and would have lost the genuineness, the evolution of the gin. So we’ve gone for hand-selected red and white Bordeaux wine casks – it’s a different expression of the same base product.

When do I decide on the cut-off point for resting the gin in the casks?

Interesting. It’s like an artist, when is the painting finished? There’s always the temptation  to keep embellishing and before you know it, you’ve suddenly gone into overkill. It’s ready when it’s ready. Once you get a combination that works, the skill is knowing when to stop. About four weeks is enough to pick up the colour and character of the previous liquid but not too much to stop it from being gin.

Pairing Burrough’s Reserve Edition 2 with cheese is our quest to bring back the classic ‘savouries’ course.

It’s an historic British culinary custom that dates back to Victorian and Edwardian times. Dessert, not pudding is cheese and fruit and cheese works perfectly with gin. 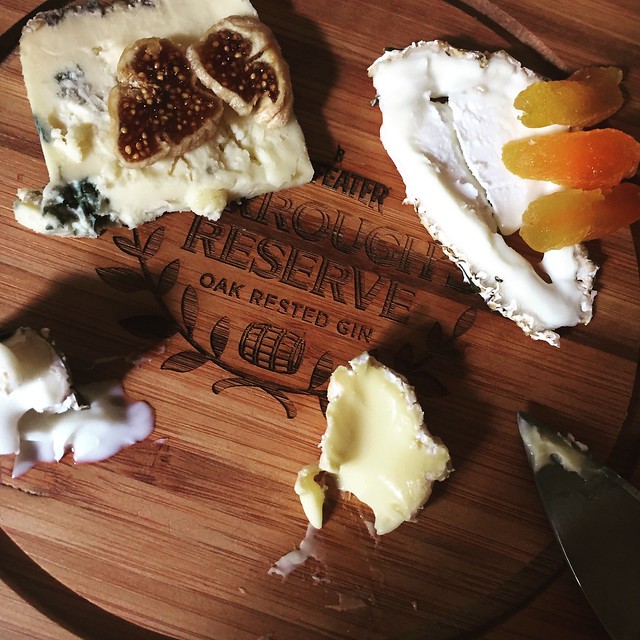 Alex makes award-winning cheeses and Burrough’s Reserve has won awards but the combination of the two things is quite different to the separate parts.

Alex and I were both anxious when we first met to see how the gin and cheeses worked. Like any good partnership each one develops the character of the other and brings out elements that might not be so eminent in its natural state. We were both delighted with the way the products enhanced each other – believe me, neither of us would have gone ahead with the collaboration if we weren’t!

Burroughs Reserve is a hand-crafted, hand-selected labour of love.

Very much like my cheeses. Desmond and I thought it would be great to do something together. The more we talked, the more cheese we ate and the more gin we drank, the more excited we got.

When anybody is as engaged in what they do as Desmond, I find that impressive. That’s why I make cheese and why I make music.

Desmond and I had been corresponding for a while then I went to the distillery and saw the stills firing up.

To me, distilling is like alchemy in the same way cheesemaking is – there’s real magic about it. 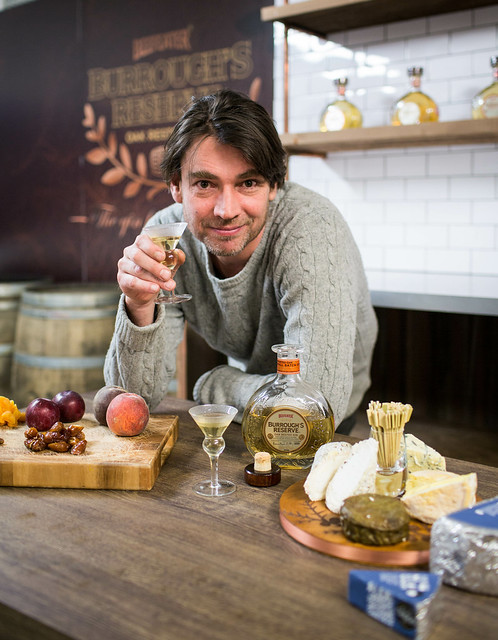 I found the idea of trying my cheese with gin very interesting.

Having looked at all the botanicals in the gin such as angelica, orris root and juniper – all wonderful flavours,  I thought the pairings could work but you never know if you’re going to end up with a car crash! However, I think all those different flavour elements invite other things to marry up – they work brilliantly with my cheeses.

You might be familiar with port and stilton but wait until you try Burrough’s Reserve Edition 2 and Blue Monday!

It’s a fantastic combination. Blue Monday is a British cow’s milk cheese which took me seven years to get right, add that to Desmond’s 48 years as a distiller and you’ve got 55 years of craftsmanship in one sitting.

Burroughs Reserve Edition 2 brought out characteristics in my cheeses I’d never noticed before.

Like the liquorice notes in Blue Monday – that was new to me. I also like how the buttery characteristics in Goddess bring out the citrus and oak notes of the gin – it almost softens the alcohol, producing a rich, dense quality. Those are my two favourite pairings although Little Wallop and Farleigh Wallop also work very well.

I usually just enjoy them with a chunk of bread. I’ve always been a big fan of a Dry Martini though but now I’d say skip the vermouth and go for Burrough’s Reserve sipping gin instead!