The genius thing about the Patrón Perfectionist’s competition is, given the brief, there shouldn’t be a dud drink in the house. How could there be? Those taking part are given a head start by choosing from three pretty darned awesome bases – the ultra-premium Patrón Silver, Patrón Añejo and Patrón Reposado. Then like the good folk who take the finely cut 100% Blue Weber agave and cook it slowly for optimum flavour, they have to create something special.

The competition launched last year with one heat in London. This year over 180 bartenders from all over the country wanted a piece of the action. As a result, there will be five, count them, five heats in the next few weeks taking place in Reading, Manchester, Edinburgh and two in London. And if the Southern heats yesterday were anything to go by, we’re in for one helluva ride.

As judges, along with Karine Tillard, Patrón Brand Ambassador, Benji Rhind, Southern Regional Finalist 2015 and our host with the most, Dan Redman-Hubley, we had front row seats – all the better for tasting the fabulous creations from the 11 competitors. Can we take a moment to praise every one of the tenders who brought their A game to Coconut Bar & Kitchen yesterday? Seriously, each of them took the Perfectionists theme and ran with it, conjuring up an array of delicious drinks that we would have happily sipped to the last drop. 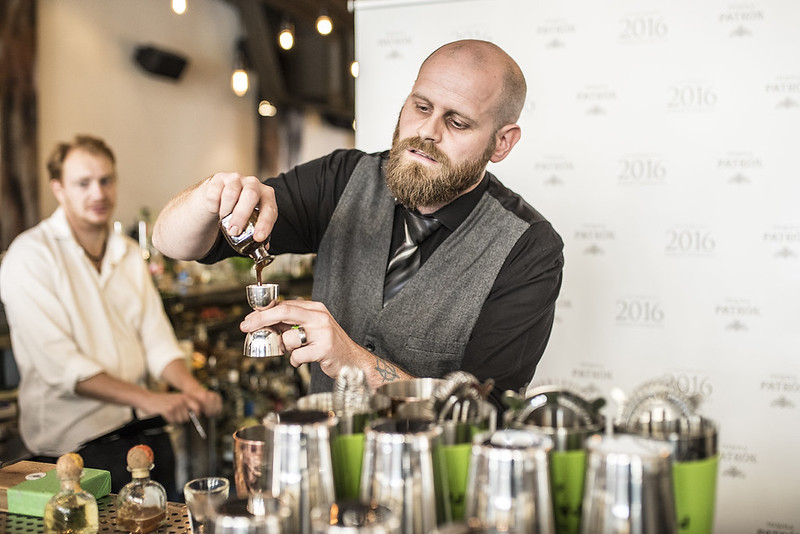 There was heat: Julien Billet used agave infused chilli, Patrón Silver infused heritage tomatoes, grapefruit juice, lime and soda in his Heritage cocktail, and Jacky Gurung from Reading muddled a thin slice of red pepper with lime leaves before adding Patrón Silver, plum wine, pimento dram and agave nectar in his drink Token of Love, which was presented on the day by team mate Scott Kink. There was honey and beeswax: James Bowker served up an elegant homage to the British countryside with his God Save the Bees (Patrón Silver, mellow, manuka and beeswax liqueur, Wilderness ‘Sourz’, Chapel Down Nectar and a dill crown spritz, while The Honey Bee from Sarah Owers representing Bournemouth was a peppery tinged drink made from honeycomb infused Añejo, honey and black pepper infused syrup and a touch of agave syrup. 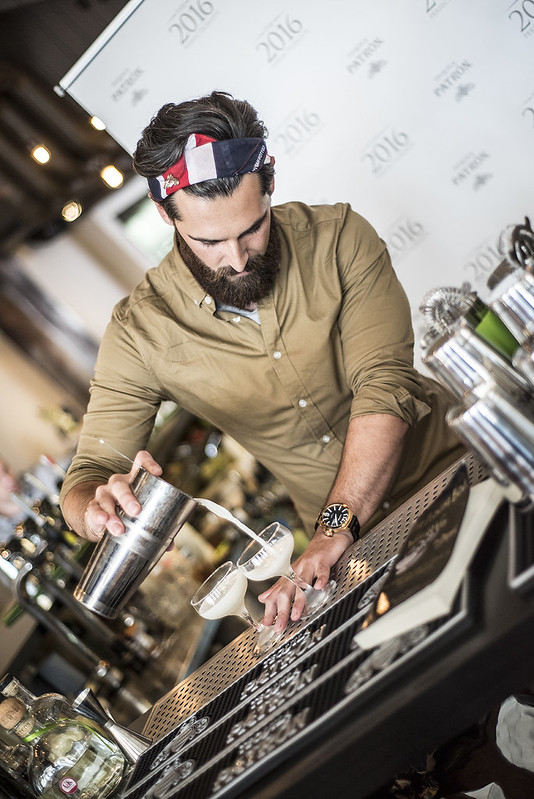 There was fruit: Lauren Shaw from Brighton cooked up a storm with her homemade ingredients including roasted mango and chipotle shrub, pineapple juice, lime juice, Kümmel liqueur and cilantro tincture blended with Patrón Silver and Bob’s cardamom bitters. Phil Yates from Oxford kept things simple and decidedly moreish with his El Papa, a long and refreshing libation made from homemade white peach and maple purée, lemon juice, Patrón Reposado and soda; while Ben Alcock from Bristol gave a very poetic, deeply considered art-inspired performance for his Fresh Start#2 cocktail, based on the Delicious Sour. His version combined RinQuinQuin peach wine, lemon juice, sugar syrup, egg white, absinthe and a dash of salt. Then there was Kristian Kovacs from Cardiff who added grapefruit cordial, prune syrup and pineapple juice with chipotle bitters, Green Chartreuse, prune juice and the all-important Patrón Reposado to create his Patrón Padilla. Steve Young from just outside Cardiff zoned in on pineapple too but he roasted his with cinnamon juice, then combined lime juice, raisin and banana shrub, lime juice and a healthy slug of Patrón Reposado. To finish, he added a large ice cube made from smoked water. Every detail was considered, including the name of his drink, Damas de Embalaje, which translates to ‘packaging ladies’, referring to the all-female line-up who put the finishing touches to each Patrón bottle. 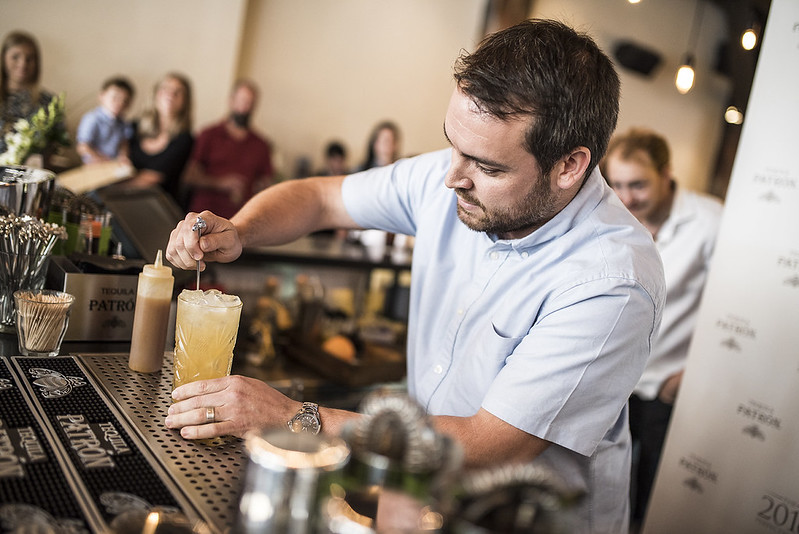 Matt Ottley from Brighton gave us bitter. His drink, The Perfect Tonic was a twist on an Old Fashioned and inspired by a G&T – Patrón Silver, cinchona syrup and tonic bitters. Then there was chocolate, as presented to us by Harvey David from Bristol. His beautifully balanced Snake Charmer cocktail called on Crème de Cacao, Cocchi Vermouth di Torino, chocolate bitters, blended back pepper tincture and a pinch of sea salt. 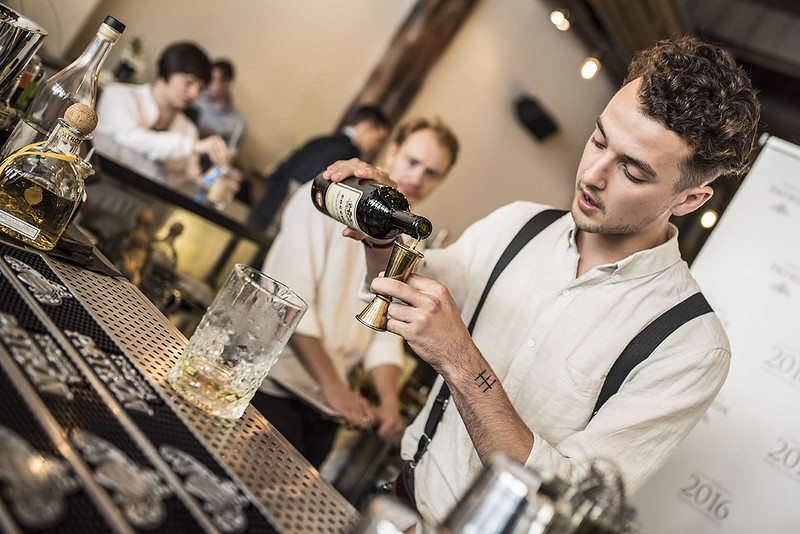 If you can taste that little lot in your mind, you’ll appreciate just how difficult it was to choose our winners. One person absolutely nailed the concept though – ticking off performance, brand knowledge, engagement and a cracker of a drink – even dropping in some cheeky banter in his 10 minute round and that was Steve Young all the way from Penarth, near Cardiff. He’s only been bartending since April last year and from where we were sitting, he’s going to be a tough one to beat. People of Manchester, Edinburgh and London, you have been warned! 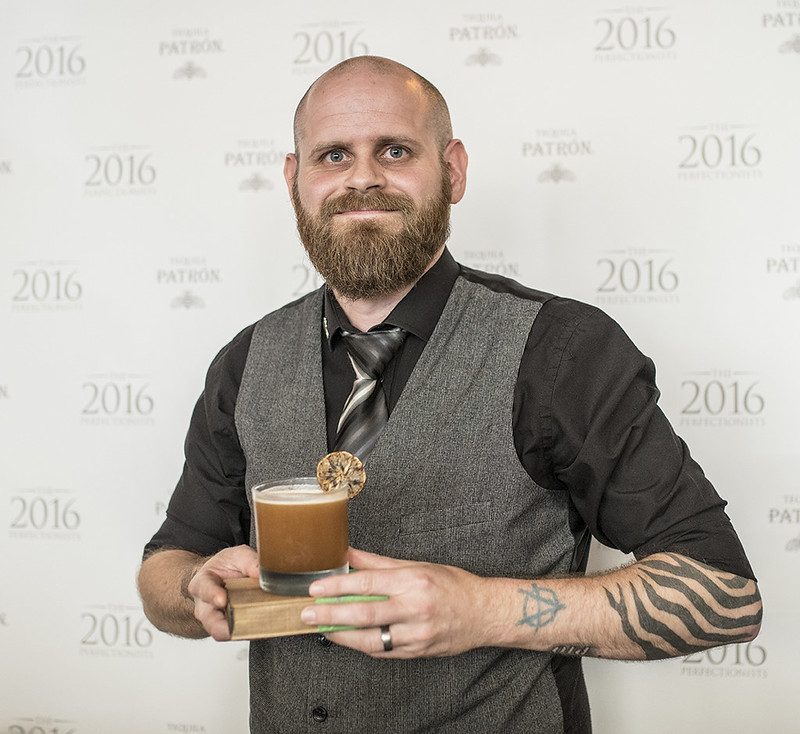 Perfection all round from Steve Young, here with his winning drink Damas de Embalaje

Steve goes through to the UK Grand Final on 16th November where he will have his eyes on the big prize: a luxury trip to Hacienda Patrón in the highlands of Jalisco, Mexico.

And let’s not forget the runners up who could have easily nabbed the top prize if Steve hadn’t been so bloomin’ awesome:
Joint second place goes to Ben Alcock from HMSS, Bristol and Phil Yates from Lucky Voice, Brighton/London. Harvey David, from The Ox Clifton, Bristol came in a very respectable third. Congratulations all round. 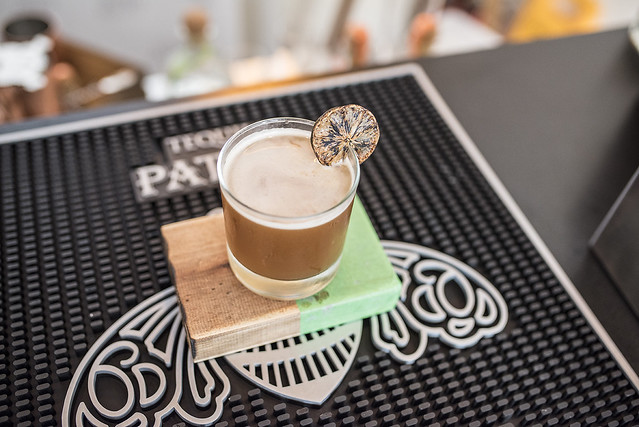 Method:
Chill down a tumbler glass. Add the pineapple cinnamon juice, Patrón Añejo, lime juice and raisin and banana shrub in a Boston Shaker and shake over ice. Remove ice from glassware and add the smoked water ice cube. Strain the drink over the ice cube. Add the lime bitter brûlée to the glass and serve on a wooden slab and green tissue paper.