Not being funny but we’ve never really thought of The Blue Bar at The Berkeley as being revolutionary. Stylish, yes. Smart, incredibly. Amazing drinks? Absolutely. Groundbreaking? Not so much.

But things have been changing down Knightsbridge way. First there was the stylish refit of the David Collins Studio designed bar, then came their striking Colours menu. And just when we’d got our heads around those two fab things, the team have gone and scored a home run with the latest addition to their drinks offering. It’s called Out of the Blue, an ordinary enough name for something that is in fact, quite extraordinary: a brand new cocktail menu that takes drinkers on a journey that engages the senses in a totally revolutionary way.

Daniel Baernreuther, Director of Food & Beverage explains. “We realised that some of the traditional cues influence the way we perceive a drink. For instance, if you have a Martini glass in front of you and it contains a pink drink, you immediately think that it’s sweet and that may or may not appeal to your palate, so you may not want to try it. But what if we were to take those cues away?,” he asks, setting the scene for his creative vision. “What if we were to strip away the garnish, any distinctive glassware – even a menu; what if you’re just left with the content and the context and the drinks in front of you?” That’s the premise behind Out of the Blue. “We’ve devised a menu of drinks that make sense as a whole when brought together with specially created visuals designed to bring out the best in each drink.”

We got the idea but didn’t have a clue how it would work. Time to check it out for ourselves… 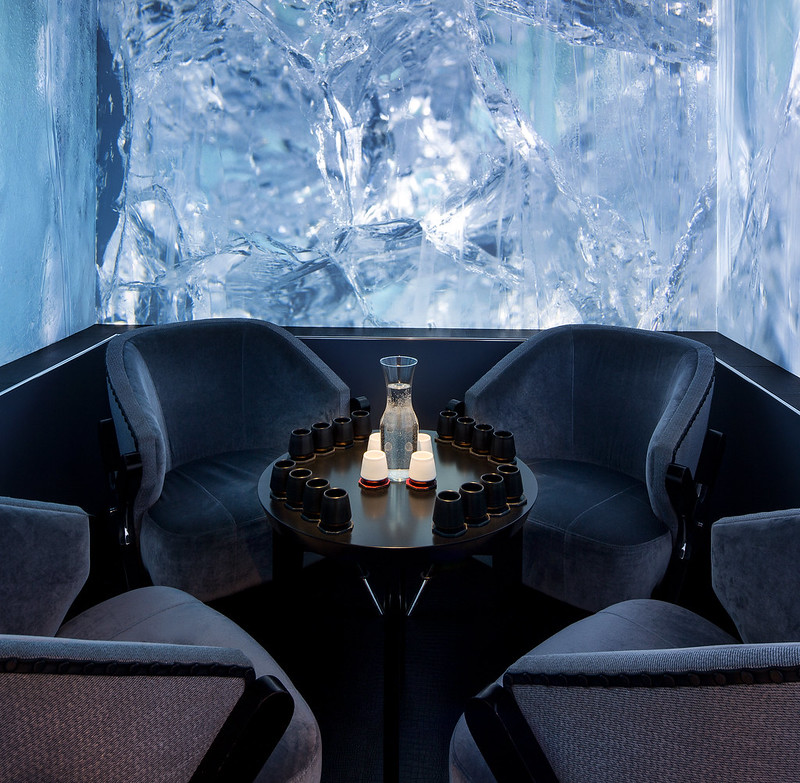 First may we give a big shout out to Paola Idda, the Out of the Blue host – if there’s anything you want to know, ask her. After getting the lowdown on what to expect we’re led to a private room. There’s no sitting around in the main bar where you could easily be distracted by other drinkers. For this experience and it really is an experience, you’re ensconced in your own little hideaway, the focal point of which are four plush chairs and a circular table with four black ceramic drinking vessels at each setting. It’s a cosy fit, not in a claustrophobic manner we might add, more of a way to focus your attention on the thrill that lies ahead.

So there you are, along with three of your friends dutifully seated and feeling a little awkward – you know, in that way when you’re not quite sure what to expect but hoping that it lives up to expectations – for yourself but also for the sake of the team who’ve worked tirelessly on it for 16 months. It hasn’t simply been a case of coming up with a concept then, bam! it’s showtime. Daniel, Rashid Ghuloom, Michele Mariotti, Andrea Melis and Olivia Johnson have had to find the right partners to bring their vision to life – people who were not only passionate about the project but who could pull off the brief in spectacular fashion.

We needn’t have worried. Just as we settle ourselves in, the room transforms into a 360-degree canvas for a spectacular display. Dramatic abstract images dance around the walls and at the same time your nostrils start twitching as one by one scents that you’re sure you’re familiar with but can’t quite place come wafting through the air. All of this as you take a sip of your drink, relying on the imagery, scents and sounds to suggest its contents.

And it works. Conversation flows rapidly as each person in the group picks out something – a subliminal message in the imagery maybe, or a connection with a particular fragrance. As soon as its suggested, the ingredients in the drink become more apparent, until seven minutes later, it’s time for the big reveal. This happens four times and by the end, you’re more attuned to how it all works.

“We went through a lot of tasting as sequencing of the drinks is key,” says Daniel. “For instance, there’s more liquid in the first vessel as we know that guests will need to familiarise themselves with the process, which means they’ll be taking more sips. By the third and fourth drink, there’s less,” he says. “But still enough for them to enjoy!” he adds quickly.

Everything in the room has been carefully considered, from the double-walled ceramic vessels,“ To keep the temperature of the drinks perfect throughout the whole experience,” says Rashid; to the forward-thinking partners including Sensiks, the sensory reality company, film-makers, Armoury and Bacardi as the main sponsor of the drinks, along with with Laurent Perrier.

As far as drinks experiences go, this one is pretty mega. Do yourself a favour and gather three friends (it only works with a group who know each other, otherwise the conversation just won’t flow). It’s £200 all in (£50 for four sample-sized drinks in this incredible setting, quite frankly is an absolute bargain).