Above: Dropshot, inspired by Andy Murray. All photographs: Addie Chinn

Even if you’re one of the ‘enough-with-the-fancy-menus-already-can-I-just-order-a bloody-drink?’ brigade, we’re thinking that despite yourself, you’ll find something to like about the new one at Scarfes Bar. Very much in keeping with the sophisticated but ever-so slightly quirky drawing room vibe of the place, it’s been purposely designed to look and feel like it’s just been picked from one of the 1,000 antique books on the shelves.

Two things that set the tone from the off; one: on the left-hand side of the cover the rather serious title, The Bartender’s Handbook of Fancy Cocktails & Concoctions has been purposely crossed out and replaced with the more cuddly My Cocktail Book. If the wording doesn’t signal that good times lie ahead, the red metallic, swirly typeface in which it’s been written will certainly help. That and the loosening up of  the po-faced jacketed bartender given a playful makeover with a pair of horns and circular specs doodled onto his face.

It’s the work of Gerald Scarfe, the renowned British artist and caricaturist who lends his name to the bar. Which is a very cool thing on two major levels. Not only do his distinctive sketches brighten up the walls in the place, the menu draws on his artistic talents as well. 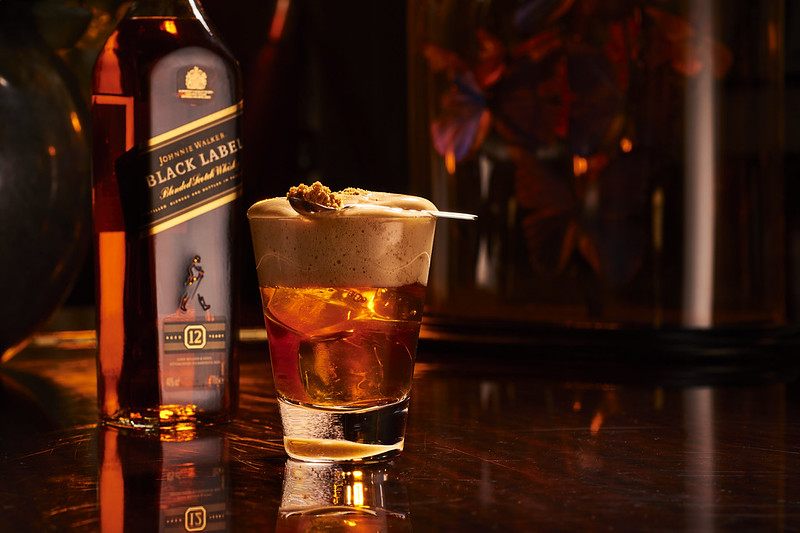 “In our first book we based the drinks on some of Gerald’s existing characters that we have on our walls,” says Bar Manager, Martin Siska. “This time we wanted to expand on that. So we went to see Gerald in his studio to see if he would create some bespoke sketches for our new menu. We were very nervous but thankfully, he said yes.”

Head Bartender Greg Almeida went along too. “Seeing Gerald in his studio was very impressive, it’s full of stories and anecdotes, much like the bar, and in a similar way, both our drinks and his sketches are art forms of connection with our guests,” he goes on: “As he comments on the news it made sense for us to stick to that idea, exploring key moments in British history. Also it meant that we could be cheeky like him but in liquid form.”

The result of the collaboration is a vibrant book, cleverly overprinted on the original The Bartender’s Handbook of Fancy Cocktails & Concoctions. The content is made up of 18 caricatures of key British figures – one for each year from 2001. That’s Gerald’s work. Where the Scarfes Bar crew come into play is by devising a cocktail to match each character. “We came up with the list of interesting people in British history – actors, musicians and a few politicians – and gave Gerald some suggestions for each year. But it was up to him to decide which ones went in. For instance, we had Mr Bean and Ali G for the same year. I was praying for Mr Bean but Ali G won and it’s great that he did, it’s a wonderful addition to the menu,” says Martin. 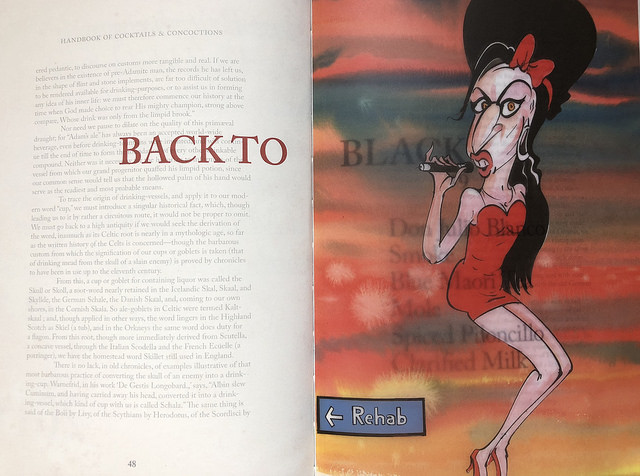 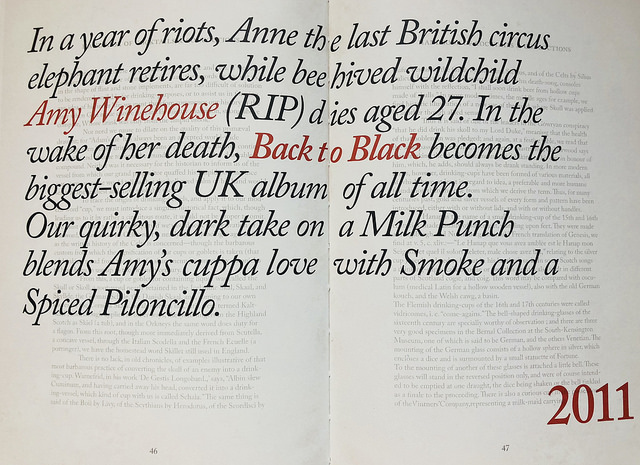 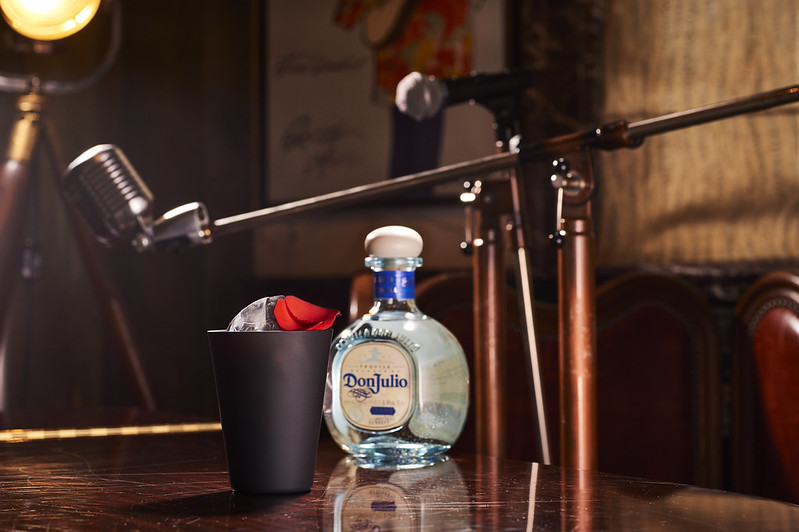 Black, the drink and on the menu, inspired by Amy Winehouse

From Amy Winehouse to The Queen, Boris Johnson to Dr Who, Paul McCartney to Prince Harry, there are a whole lot of Brit hits to get stuck into. Each ‘chapter’ has an insight into the year and some essential blurb on the protagonist, then leads into the drink. Which is where the cheeky bit comes in. For instance, Simon Cowell the “poker-faced pop mogul” famed for wearing his trousers unfashionably high has a drink called High Wasted, a long whisky and tobacco highball, while Boris Johnson, erstwhile Mayor of London and champion of getting the British capital cycling, inspired On Yer Bike, a cobbler style cocktail made from Maker’s 46, 5-Berry Wine, tomato, coca nibs and rhubarb.

“Last year we had nice characters but they didn’t have a life and we lacked interaction with our guests. This year the menu has a voice that brings the drinks to life,” says Greg proudly. “There are lots of little details in the book, like Post-It Notes and postcards for guests to take home, plus we have a flavour map at the front and have made the typeface deliberately large throughout so guests can read the stories and cocktail ingredients in dim lighting.” Clearly a lot of work has gone into it. 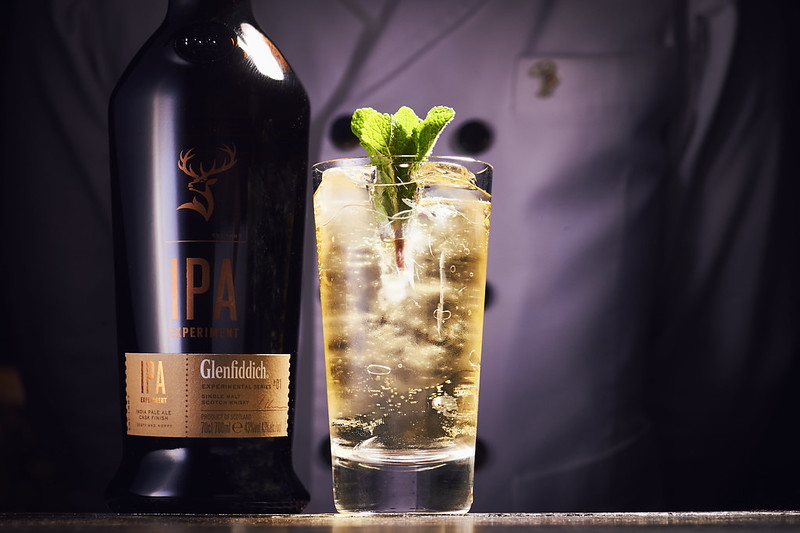 Martin concurs: “It’s been a real team effort. We divided up the years and personalities that we’d chosen to highlight and everyone had to do their research on the character – what they like, what they disliked, where they come from and find a story for that period. It’s been a lot of fun.” But the real test is in the tasting and we’re happy to say the drinks pass on that front too.

Greg on the first two cocktails:

2001: Ricky Gervais aka David Brent. “This was a big year in British culture and the year that we saw The Office for the first time – now it’s seen in 14 countries. David is a very bitter/sweet character so we wanted to go for an aperitif style drink – a twist on a Negroni. While doing our research we found out Ricky Gervais is a flexitarian, so we focused on a vegetal-style drink with different flavours: Tanqueray No TEN is fat-washed with pumpkin seed oil for a nice nutty mouthfeel. We then add Campari infused with burnt cauliflower and burnt caraway seeds which gives more nuttiness, a hint of bitterness and chocolate notes, with the caraway bringing out the aniseed flavours and chocolate notes. We infuse that in Campari for six hours, then strain and have two products: the Campari which we pair with some tonic port and Aphrodite bitters, then we pickle some cauliflower for a healthy snack which we serve alongside with a seasonal salad garnish which is nice, crispy and flavourful.” 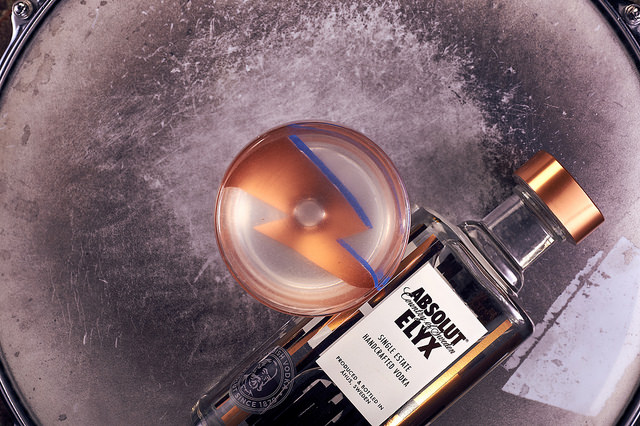 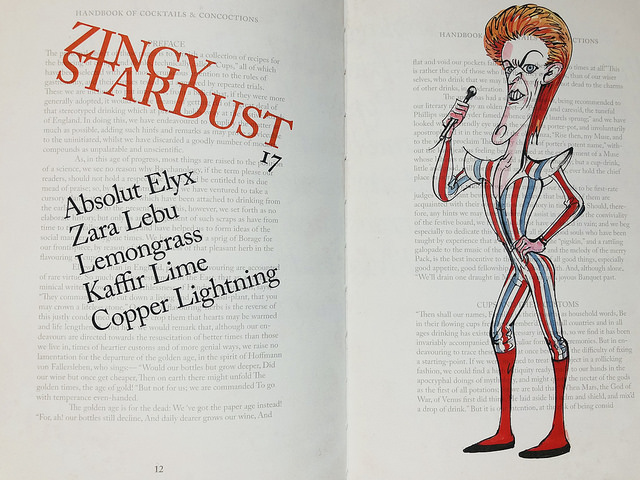 2002: David Bowie. The year that David Bowie played his rejected album Low in a series of highly-acclaimed concerts. This started a trend for famous people playing songs that people hadn’t heard before. In honour of this we created the Zingy Stardust, a play on a gimlet. Everyone likes a gimlet – it’s sweet, sour, strong and flavourful. We use Absolut Elyx and a add zingy cordial – it’s like lime juice on steroids with lime, lemongrass, shiso leaves, kefir leaves, the zest of zara lebu (an Asian citrus fruit), lime acid and sugar; for the ‘zingy’ effect, we add Electric Bitters. The drink comes in a handprinted glass that echoes Bowie’s distinctive make-up to tie the whole thing together.

Greg on his favourite drink and character:

Ali G for sure. Imagine that we have a drink on our menu called Booyakasha! I’m so happy. Sacha Baron Cohen, his creator is a massive fan of Margaritas so we created a spicy Margarita made with Patrón Silver infused with dried mango, and add habanero distillate, Martini Rubino, verjus and pink grapefruit, so there’s fruitiness and a little spice.

Scarfes Bar Cocktail Book Vol. 1 is available now. Copies of the menu – 18 artworks by Gerard Scarfe for goodness sakes – can be purchased for £35 with all proceeds going to Parkinson’s UK.