Last week Istanbul was the exotic destination for eight international bartenders as they each continued a very personal journey in the hope of being crowned the winner of the 2018 Opihr Gin World Adventure Cocktail Competition.

It was in this historic Turkish city that they were tasked with presenting a unique cocktail. It had to be a cocktail that transcended borders, cities and cultures, as well as taking inspiration from their visit to Istanbul itself. The bartenders were also given the opportunity to exchange knowledge and ingredients with their fellow finalists. The finished cocktail had to express the unique qualities of Opihr Gin and use no more than five ingredients. A key part of the brief was also that the cocktail should be accessible to someone who has never tried Opihr Gin before, but could also deliver a pleasing experience to seasoned gin drinkers too.

The two days preceding the final presentations found the bartenders immersing themselves in Istanbul’s culture, tastes and aromas. They embarked on a walking tour which included visits to exotic food and spice markets, where they could source unusual local ingredients and unique props to bring their final cocktails beautifully to life. They were also privileged to enjoy a visit to a local tea house and be introduced to the art of glassblowing, giving them a very different perspective on the glassware they regularly used in their bars. All in all two days of amazing inspiration.

Then it was time to get down to the business of the competition itself. Stepping up to the challenge were Alan Alvarez, Mexico; Salvatore Calvo, Netherlands; Charley Carrington, United Kingdom; Loreta Kwong, Australia; Barney O’Kane, Republic of Ireland; Julian Short, South Africa; Nguyen Thanh Trung, Vietnam and Alessio Turetta, Italy.

All of them delivered brilliantly on the brief with a whole range of Opihr Gin cocktails but the outstanding presentation came from the United Kingdom’s Charley Carrington of Last Chance bar in Nottingham. As well as the drink itself the judges were particularly impressed by Charley’s ability to add a multisensory experience to her cocktail Serefe, through sights, sounds and aromas. She also chose to add an Istanbul inspired twist to her original UK winning cocktail.

“I liked how Charley’s cocktail was simple, modern and incorporated current drinks trends such as ingredients like whey”, said judge Ondrej Pospichal. “I also liked her use of homemade syrups and cordials. The cocktail’s easy to replicate at home but complex enough for an adventurous bartender to bring the unique character of Opihr Gin to drinkers in a different way.”

Crowned the Spirit of Opihr, Charley will now set to work on a range of exciting projects as she supports the Opihr brand team around the world in an honorary brand ambassador role. But for now it was all about the winning moment. “I had the most amazing time in Istanbul,” said Charley, “and learned so much from my fellow bartenders. It means the absolute world to me to be crowned the global champion.” So one journey has ended for Charley as she took the title, but a another one is about to begin in the coming year with the promise of many adventures ahead.

It’s also about to be a new journey for more international bartenders according to Robert Milton, International Brand Director for Opihr Gin at brand owner, Quintessential Brands, “We’re already looking forward to next year’s competition and introducing more bartenders to the Opihr family.”

We look forward to following some very special journeys.

Shake all ingredients over ice and double strain into a chilled glass. 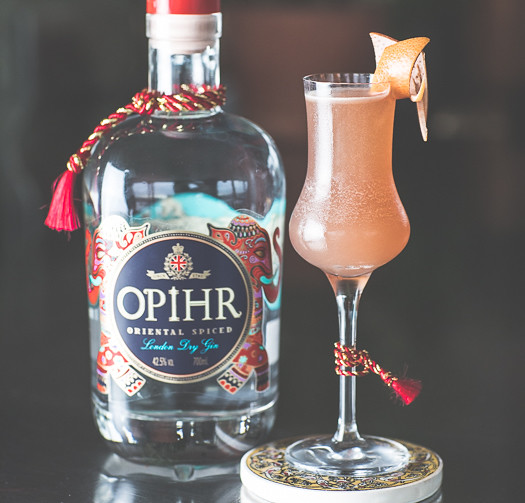